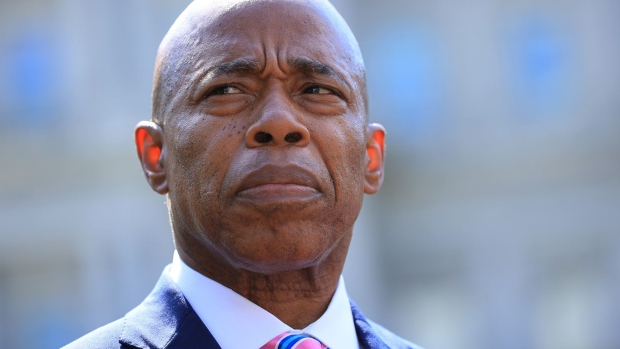 (Bloomberg) -- New York City hasn’t been enforcing the rule mandating that private businesses require employees to be vaccinated against Covid-19, and a spokesman for Mayor Eric Adams said the administration has no plans to start doing so.

Newsday reported on Wednesday that the city hasn’t been inspecting businesses to check for compliance since Adams took office in January. The rule, one of the strictest in the US, was implemented during the final month of the administration of former Mayor Bill de Blasio. Businesses said the mandate would be difficult to enforce and could lead to worker shortages.

“We have been focused on prioritizing education instead of enforcement when it comes to the private sector mandate, which is how we’ve been able to get more than 87% of all New Yorkers with their first dose to date,” Fabien Levy, a spokesman for Adams, said in an email on Thursday.

The rule went into effect on Dec. 27. At the time, city data showed only 31% of 3,025 businesses inspected were complying with the order, Levy told Newsday. The requirement applies to the roughly 184,000 businesses with operations in the city. With the rule still on the books, New York City is the only jurisdiction in the US with an active vaccination mandate for private employers.

De Blasio had said businesses would face fines of up to $1,000 if found in violation of the mandate. Adams said in late December that he had no plans to reverse the de Blasio rule but that his approach would be “cooperative, not punitive.”

The lax enforcement of the private-sector mandate stands in contrast to Adams’s approach in the public sector, where some employees, including police officers, teachers and sanitation workers, have been fired for failure to comply with the vaccination requirement.

According to the New York Times’s Covid-19 vaccine tracker, 91% of New Yorkers have gotten at least one dose and 78% are fully vaccinated against the virus.