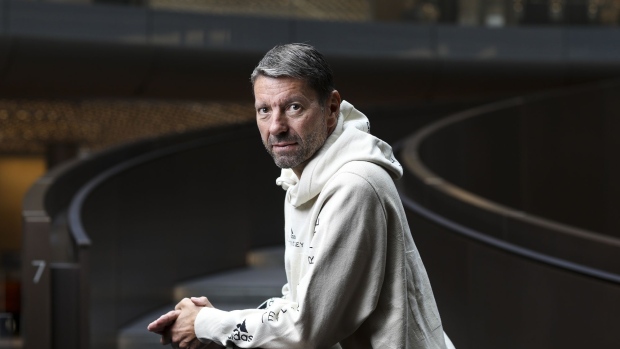 Kanye West and Adidas announce the future of their partnership in 2016. , Bloomberg

(Bloomberg) -- The abrupt departure of Adidas AG’s head of human resources this week marks the second high-profile loss of a female board member among Germany’s most important companies, diminishing diversity and putting Europe’s largest economy increasingly out of step with a global push for inclusion.

Karen Parkin resigned from the management board on June 30 after coming under fire for characterizing staff concerns over racial disparities as “noise.” Black employees have criticized management for not doing enough to promote their cause. Adidas Chief Executive Officer Kasper Rorsted will assume her role until a successor is found.

While the departure of the 23-year company veteran gives Adidas a chance to reset, it also creates a management board -- at least for now -- that goes in the opposite direction of society’s push: all men, all white. That, however, remains the common look across the wider German corporate landscape, where women play only a subordinate role and racial diversity is almost entirely non-existent.

“It’s getting a little embarrassing,” said Christian Berg, a director at the Berlin-based AllBright Foundation, which seeks to promote female diversity in leading corporate positions. Berg points to a startling homogeneity among Germany’s most senior managers, which he says are typically white economists in their 50s, raised and educated in West Germany and whose first name is either Thomas or Michael, with a few Stefans thrown into the mix.

The problem isn’t that qualified women and people of color aren’t available, but the social networks among middle-aged men are so robust in corporate settings that many people don’t even see what’ shappening, Berg says.

“They’re used to promoting the people they know, that they’re familiar with,” Berg said.

As of September, women only made up 9.3% of positions on the executive boards of Germany’s publicly traded companies. By contrast, women in Sweden made up 24% of those positions and the rate is even higher in the U.S.

Germany did introduce a law in 2016 that requires 30% of non-executive board -- the supervisory board -- members of Germany-headquartered companies to be women. But for now, there is no woman running one of the country’s 30 biggest listed companies. Jennifer Morgan, the first female to break that glass ceiling when she took the top job at SAP SE last year, lasted only a few months before her co-CEO, Christian Klein, took sole charge.

To some extent, insularity has helped executives in recent decades focus on optimizing processes and products -- something that’s particularly benefited engineering-type businesses, said Simone Menne, the former chief financial officer of Deutsche Lufthansa AG and Boehringer Ingelheim GmbH. But as technology reshapes industries and calls grow louder for a more holistic definition of corporate culture, such narrow, practical views look increasingly out of date, she said.

Menne is an exception in corporate Germany -- a woman who’s made her way repeatedly to the top, albeit never quite to the chief executive officer role to which she aspired.

Based on her experience, she says, companies need a “critical mass of diversity” at the top so that a single woman or person of color doesn’t get marginalized. That’s becoming increasingly urgent as German companies struggle to pivot from optimizing products to navigating fundamental disruptions in their business models. At a time when technology allows for unprecedented collaboration and public interaction with customers, it’s vital for company leaders to understand a wide range of perspectives.

“Diverse boards do that because there is always somebody who says, ‘Shall we not also look into this part, or this part?’” Menne said. “That is very important if we talk strategy, and strategy is done in the executive board.”

Parkin grew up in the U.K., has U.S. citizenship and lives near Adidas’s North American offices in Oregon. She became global head of HR in 2014 and was elevated to the six-member executive board in 2017, becoming Adidas’s first woman at that level since the early 1990s. Her promotion came just a year after Rorsted, who grew up in Denmark but has worked in Germany since 2002, joined as CEO.

The company declined to comment further for this story.

Adidas is often regarded as one of Germany’s most forward-thinking companies in terms of digital and cultural awareness. It has enjoyed steady growth in demand for athletic and casual clothing -- including retro products like the 1970s-era Stan Smith tennis shoes and Superstar basketball kicks, along with Kanye West’s high-priced Yeezy line of sneakers. All the while, Rorsted has drawn praise for cutting costs, optimizing operations and increasing profit margins.

Plenty of Adidas’s peers have struggled with diversity issues, too. Nike Inc. came under fire last year for not giving female professional athletes sufficient maternity leave and for its seemingly steadfast support of a track coach whom many female athletes accused of emotional abuse. UnderArmour Inc. had some explaining to do after, among other things, top executives charged visits to strip clubs on company cards.

“There are industrywide problems,” said David Swartz, an analyst at Morningstar in Chicago. “Nike, Adidas, and other sports companies are highly dependent on African-American athletes and consumers, but the decision-makers are often White.”

Since 2015, Adidas has increased the number of women in leadership positions at all levels to 34% at the end of 2019, up from 29%, the company said. It also has “gender intelligence” training, recruitment targets for women and clear goals for mentoring and promoting female workers. Globally, 52% of Adidas’s staff is female, the company said.

Adidas’s operations are global and growing fast in Asia, too. The supervisory board has five women out of 16 members, including a woman appointed last year who is a U.S. citizen and was born in China. There is also a man who has dual Belgian and Egyptian nationality. Everyone else is either German or French. There are no Black members.

The company’s headquarters can also feel a world away from the demonstrations for greater racial equality in the U.S. in recent weeks. It’s located on the outskirts of Herzogenaurach, a town of 25,000 located in the rolling hills of Bavaria about 20 miles north of Nuremberg. It’s also about a mile from rival Puma SE, whose three-member executive board includes a male CEO from Norway, a male CFO from Germany and a female chief sourcing officer from France. Puma’s six-member supervisory board is all European, including two women, one of whom is Black.

For Adidas, the drumbeat of negative news is likely to persist until it fixes the lack of diversity at the top, said John Kernan, a New York-based analyst for Cowen, calling it “bizarre” that the company now has no women on its executive board.

“At this point, with how big lifestyle offerings have become as a proportion of these overall businesses, to not have a woman’s hand designing, marketing, sourcing all this stuff, it’s crazy,” he said. “You’re asking for trouble.”