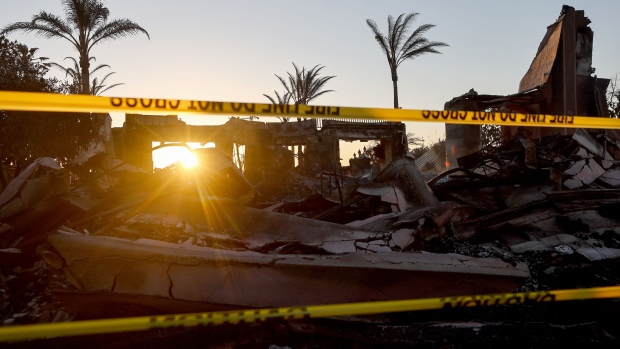 LAGUNA NIGUEL, CALIFORNIA - MAY 12: The sun begins to set beyond one of over 20 homes destroyed by the Coastal fire on May 12, 2022 in Laguna Niguel, California. The brush fire was fueled by windy and dry conditions amid California’s severe drought which has been compounded by climate change. (Photo by Mario Tama/Getty Images) , Photographer: Mario Tama/Getty Images North America

(Bloomberg) -- An affluent Southern California city ravaged by a wildfire last week had been experiencing sudden voltage swings more frequently in the past six months -- including a brownout minutes before the blaze was reported, according to home sensor maker Whisker Labs Inc.

Plug-in sensors in dozens of Laguna Niguel houses detected voltage drops from utility power lines on May 11, plunging to 83.9 volts from 120 volts for almost a second at 2:41 p.m., according to the device developer. Reports of the fire came three minutes later.

It’s not clear if the fire was tied to the electrical system. An investigation into the blaze is ongoing. The incident destroyed at least 20 homes and forced about 900 residents to flee the Orange County community 54 miles (87 kilometers) south of Los Angeles.

Edison International’s southern California utility declined to comment on Whisper Labs findings. Southern California Edison had reported a “circuit activity” on one of its power lines near the start of the fire using its own grid surveillance and is reviewing all information made available to the utility in its investigation, spokesman David Song said.

Whisker Labs Chief Executive Officer Bob Marshall said the frequency of voltage swings have been rising in the wealthy enclave since October, making it a clear “hot spot” in California for the phenomenon. Households in the area equipped with the sensors are seeing about two grid defaults a month on average, almost double from the start of the year, according to a Whisker Labs presentation.

“We cannot say that this fault caused the fire,” Marshall said, adding that “these faults have been occurring more and more frequently and it’s been building up.”

Whisker Lab’s CEO said he briefed State Farm General Insurance Co. executives on his findings Thursday because the insurer covers homes in the area. The insurer provides Whisker Lab’s Ting sensors to customers to act as a detector for electrical anomalies inside homes and on the utility grid.