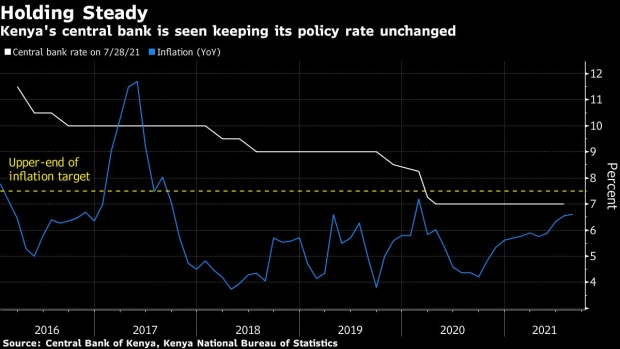 Central bankers in eight key African countries are likely to leave borrowing costs unchanged this month to support the recovery of economies that remain vulnerable to coronavirus-induced shocks.

Parts of the continent are wrestling with a third wave of infections driven by the highly transmissible delta variant. Africa is the world’s least-vaccinated region with only 3.2% of 1.2 billion people fully immunized, leaving it vulnerable to new waves and stricter lockdown measures that could weigh on output.

Economic growth this year is bound to be higher than in 2020, when restrictions to curb Covid-19’s spread pushed the continent into its first recession in a quarter century. But a shortage of vaccines and sluggish rollout could lead to a more protracted recovery for many nations, according to Jibran Qureishi, head of Africa research at Standard Bank Group Ltd., the continent’s biggest lender.

The timing of interest-rate hikes and bond-purchase tapering in advanced economies including the U.S. could also weigh on decision-making, he said. Lower-for-longer global rates mean African central banks won’t be forced to tighten policy to help keep local assets attractive to offshore investors.

Here’s what regional central bankers may do:

Egypt has left interest rates unchanged this year, and will likely do so until the end of 2021 given concerns about the impact of Federal Reserve tapering on emerging markets.

After cutting the benchmark by 400 basis points last year, the central bank will be looking to maintain the differential between key policy rates and inflation that’s the highest among more than 50 economies tracked by Bloomberg. The ranking makes Egyptian debt a favorite among emerging-market investors, giving the economy an important buffer as tourism struggles to fully recover from the pandemic.

“Egypt will want to maintain its competitiveness within the emerging-markets portfolio given the global expectation for higher rates in advanced economies and growing concerns over Fed tapering,” said Radwa El-Swaify, head of research at Cairo-based Al Ahly Pharos.

Nigerian policy makers are expected to leave the benchmark interest rate unchanged for a sixth meeting on Friday as they look to build growth momentum in Africa’s biggest economy.

Output undershot forecasts in the second quarter, suggesting the economy is struggling to recover from its biggest contraction in almost three decades. While inflation remains at nearly double the top end of the target band, it’s predicted to slow to 17% in August, according to the median of estimate of nine economists in a Bloomberg survey.

“They will want to see if growth sticks and inflation continues to come down,” said Joachim MacEbong, a senior analyst at SBM Intelligence. If not, they’ll probably look to adjust the key rate at a future meeting, he said.

South Africa’s MPC will probably leave its benchmark repurchase rate at a record low to support an economy seen contracting in the third quarter after deadly riots and a cyber attack at the state-owned ports and rail operator hit activity. The committee turned less hawkish on policy normalization at its July meeting, days after the unrest erupted in the two biggest provinces by contribution to GDP.

“Growth is still not at the point where we can comfortably start to hike rates,” said Elize Kruger, an independent economist. “The fact that interest rates are as low as they are for as long as they are is definitely supporting the economy and I don’t think they can walk away from that at this point in time.”

Low global interest rates, together with inflation that’s expected to remain within the MPC’s target range through 2023 and a resilient local currency that’s being supported by high commodity prices, gives it room to maintain an accommodative policy stance, she said.

Ghana’s central bank is likely to leave the key rate unchanged at a nine-year low to boost its economy that expanded at the slowest pace in 37 years in 2020.

While consumer prices rose for a third straight month and is seen nearing the top of the target band in August, the MPC estimates inflation will remain within the range for the next 18 to 24 months. That should give it room to keep an accommodative policy stance.

“The MPC can’t tighten the rate because the real sector’s recovery has been weak and vulnerable to downside risks from a resurgence of Covid-19 and slow pace of vaccination,” said Courage Martey, an economist at Databank Group in Accra. “A rate cut will further fuel the inflationary pressure, so the rate will be held.”

Angola’s central bank is expected to stand pat after unexpectedly raising its benchmark rate to a record high in July to try curb rampant inflation.

The MPC will probably want to wait and see how its last move, as well as new measures by the government to counter inflation such as easing restrictions on imports, filters through the economy, said Universidade Catolica de Angola Economist Carlos Rosado de Carvalho.

“If it depends on the central bank, the rate will be kept unchanged,” he said. “If the International Monetary Fund has its way, the rate may be increased.”

The Washington-based lender has since at least June 2019 recommended a tighter monetary policy stance for Africa’s second-largest oil producer.

Kenya’s MPC should keep the key rate unchanged for a 10th straight meeting as the pandemic continues to weigh on the business environment after the economy in 2020 contracted for this first time in 29 years.

While credit extended to the private sector grew to 7.7% in June, it’s still below the central bank’s 8.5% target and shows that lenders remain cautious amid uncertainty, said Churchill Ogutu, head of research at Nairobi-based Genghis Capital.

Inflation that accelerated to an 18-month high in August remains within the target range, giving the committee room to continue supporting the economy. “I see less headroom for further rate tightening, unless we see a material shift in the indicators in the coming months,” Ogutu said.

The Bank Al-Maghrib is expected to leave interest rates at a record low at its first meeting since a business-friendly political party closely aligned with King Mohammed VI won parliamentary elections.

While inflation accelerated to a three-year high in July, last month’s allocation of new IMF reserves bolstered the kingdom’s foreign-currency buffers and should give the bank room to sidestep immediate concerns about imported inflation until a new government agrees to a budget bill.

The bill will probably shape the agenda for the implementation of Morocco’s so-called National Pact for Development. The Independent National Rally’s victory should see the country move faster on plans to address structural economic weaknesses that were blighted by the pandemic.

Tunisia, date to be confirmed

Tunisia’s central bank will carefully weigh the nation’s constitutional crisis when it meets at month’s end. The lender hasn’t touched the key rate all year.

At its last meeting in August, the central bank urged the authorities to work toward restoring investor confidence, after President Kais Saied suspended parliament and fired the prime minister. Saied has called on commercial banks to lower borrowing costs at a time when the inflation rate is near the highest in almost two years.