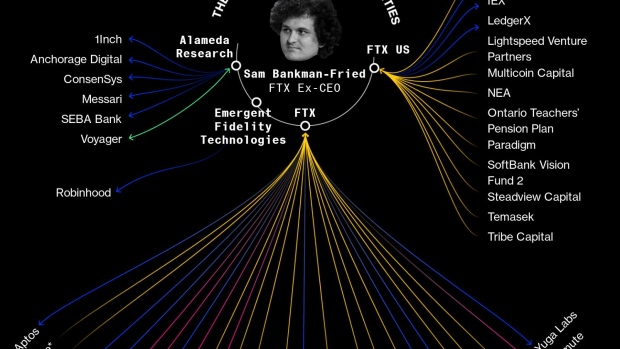 (Bloomberg) -- Moves by cryptocurrency exchanges to reassure markets about their stability are having little effect on jittery users, who keep pulling funds from the venues.

Platforms from Binance to Crypto.com have made full or partial disclosures outlining their assets since FTX.com unraveled last week. Yet clients’ stampede for the exits has persisted, with exchange reserves of Bitcoin, Ether and stablecoins falling sharply, according to data from CryptoQuant.

The problem is many so-called proof of reserves published so far have left out liabilities, haven’t been vetted by outside auditors and don’t provide clarity on which, if any, of the assets exchanges hold have been pledged as collateral for loans. With the disarray in FTX’s finances now laid bare to the broader public, anything short of a complete accounting will likely fail to fully restore confidence, market watchers said.

“The issue is proof of reserves are a snapshot in time of funds in certain wallets,” said Maya Zehavi, a cryptocurrency angel investor. “People need to verify the exchange’s total liabilities, and that no client tokens were pledged as collateral, as well as the health of those assets put up as collateral.”

A full-blown crisis of confidence in exchanges would have dire consequences for the crypto industry because the venues often operate as brokers, custodians and clearing houses — meaning the collapse of one platform can kick off a daisy chain of failures reaching into every corner of crypto.

Contagion from FTX is already spreading, with crypto brokerage Genesis announcing on Wednesday that it’s been forced to suspend redemptions at its lending unit. The same day, Tyler and Cameron Winklevoss’ Gemini Trust Co. delayed redemptions in its Earn program. BlockFi Inc., which has close links to FTX US, is preparing to file for bankruptcy, Bloomberg News reported this week.

In FTX’s case, oversight and record-keeping of assets were so poor that new CEO John J. Ray III compared it unfavorably with Enron Corp., whose liquidation he oversaw. Advisers have located “only a fraction” of the digital assets that they hope to recover during the Chapter 11 bankruptcy, Ray said.

The fact that FTX was able to keep such glaring deficiencies hidden for so long shows accounts must be audited and assets valued by third parties, some crypto executives said.

Binance, the world’s largest cryptocurrency exchange, on Nov. 10 disclosed what it called a “snapshot” of its major token holdings and said more data will be shared later in a “full audited report.” A Binance spokesperson said the exchange will publish audited reserves and liabilities in coming weeks.

“Proof of reserves doesn’t require lawyers or traditional auditors,” said Matt Luongo, the co-founder of blockchain privacy service provider Threshold. “The whole process is voluntary. Therefore, while this type of disclosure may have helped head off the FTX disaster, there is no proof that any centralized exchange doesn’t have liabilities senior to its customers’ deposits.”

Austrian crypto exchange Bitpanda said on Tuesday that it had hired KPMG to verify that customer assets are covered by corresponding crypto funds in the exchange’s wallets. Only four of 23 exchanges listed on an “assets transparency” tracker published by Coinglass have appointed auditors for their liabilities. The tracker doesn’t mention Bitpanda.

Still, audits may only be part of the solution.

Some of the risks in crypto stem from the way the nascent market is structured, with exchanges carrying out functions that in traditional finance are distributed between multiple entities — the majority of which are regulated, and many of which are also publicly traded.

That concentration of functions in crypto could lead to conflicts of interest and lack of transparency regarding client assets, said Jack McDonald, CEO of PolySign, which owns a crypto custodian and fund administrator.

The intractable nature of those issues was highlighted in a press release issued Friday by Bybit, one of the largest crypto exchanges. In the statement, CEO Ben Zhou called on the industry “to step up together and help reassure nervous customers and governments.”

Yet Zhou also said the “complexity” of crypto companies means “it will take some months for Bybit to complete and provide a comprehensive and true picture of its accounts that is acceptable to every stakeholder and helps re-establish trust — rather than patchy information that could ultimately confuse.”

Too Big to Fail

Many of finance’s current safeguards were put in place after the 2008 global financial crisis, when a surge in delinquent US mortgages caused a banking industry contagion, leading to a deep recession. The term “Too Big to Fail” entered the vernacular, describing organizations that had gotten so systemically important that they had to be bailed out using taxpayer money.

Then, as now, opacity compounded the problems. In 2008, it was shaky mortgages packaged into complex securities; with FTX, it was financial entanglements with trading house Alameda Research that reportedly involved customer funds and ultimately blew up Sam Bankman-Fried’s empire. FTX is facing a probe by US prosecutors.

“The crypto market does not feature currently many of the safeguards of traditional market structure, and a lot of its recent issues are rooted in a lack of transparency,” said Anish Puaar, head of European equity market structure at trading firm Optiver. “One wonders whether a lot of this pain could have been avoided with better protections.”

Some regulators are prodding the industry in that direction. Singapore’s central bank has proposed that exchanges must properly segregate customers’ assets and disclose what would happen to them if the firm becomes insolvent. It has also proposed that firms mitigate any potential conflicts of interest arising from the multiple roles they perform.

“We might see centralized exchanges face some new requirements, such as the need to separate custody of client assets from the exchange itself,” said Frederic Lardieg, a partner at Mubadala Capital Ventures, which co-led a $70 million funding round in crypto payments company Ramp this month.

Many traders aren’t waiting to find out. Exchange reserves of Bitcoin and Ether are at their lowest levels since 2018, data from CryptoQuant show. Stablecoin reserves have slipped to the lowest since January, according to the data, which measures the number of tokens rather than the dollar value.

Crypto investors also appear to be switching to decentralized finance, where trading is handled without intermediaries and governed by so-called smart contracts that execute trades and liquidations based on a transparent set of rules.

“There has been a dramatic hit to confidence in not just the instrument, but the market structure which holds up the entire asset class,” said Dushyant Shahrawat, director of investment banking at Rosenblatt Securities, which offers advisory to crypto and fintech companies.

--With assistance from Eva Szalay and Suvashree Ghosh.