Even for Alphabet Inc., financial gimmickry is no match for the power of the bear market.

The Google parent’s shares sank 2.5 per cent on Monday, the first day of trading after a 20-for-1 split that brought its stock price down to the US$100 range from more than US$2,000. Alphabet shares dropped more than 3 per cent this week while the Nasdaq 100 Stock Index advanced and has fallen more than 20 per cent since the split was announced Feb. 1.

It’s not alone. Of the four companies in the S&P North American Technology Index that split their stocks this year, none of them have gained appreciably since announcing the plans. Amazon.com Inc. has fallen 12% since declaring its split in March. Canadian e-commerce company Shopify has fallen 38 per cent and cybersecurity company Fortinet Inc. is up about 2 per cent. 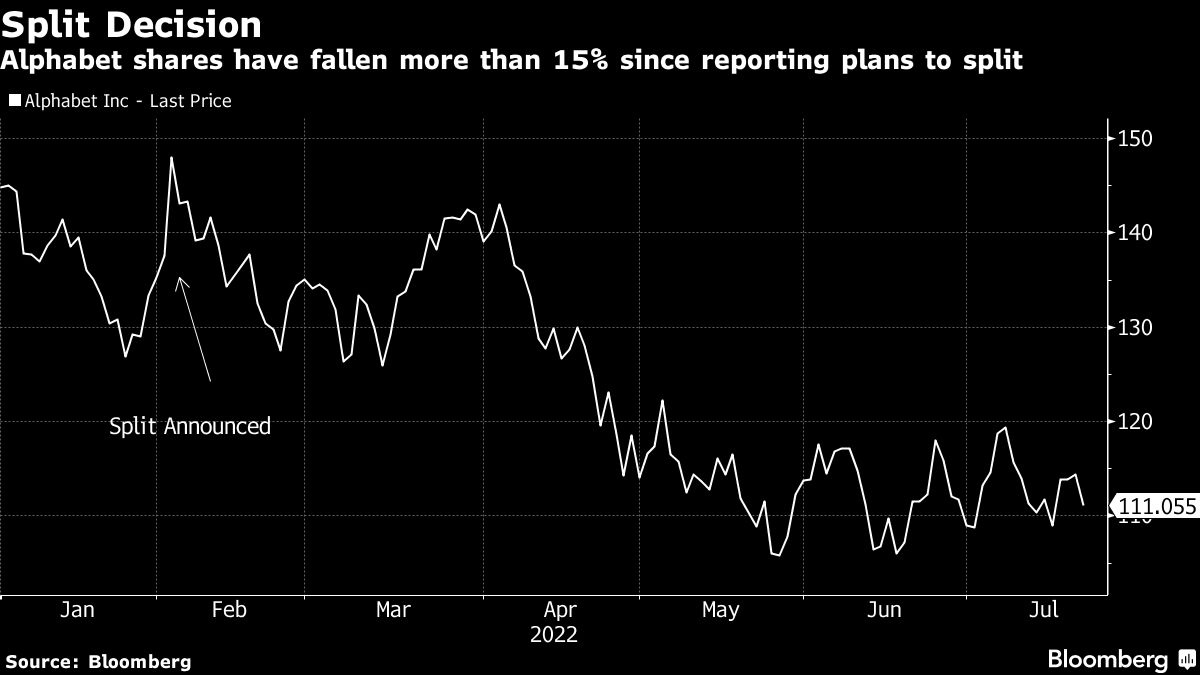 The lackluster performances are a far cry from the heady days of 2020 when Apple Inc. and Tesla Inc. helped revive the practice after their stocks surged to records in the months after annoucning the plans. In the following year, there were five splits in the S&P 500, compared with just two in 2019, according to data compiled by Bloomberg.

The aim of a stock split is simple: bring down the cost to purchase a share so that more retail investors can afford it and spreading the company’s equity over a larger number of shares. Some investors, however, tended to view the decision by a company to split it stock as a positive cue.

“A split of a very popular tech company is seen as a way to bring in the retail investor at a time when institutions aren’t buying with slowing economic growth, inflation and higher costs,” said Phil Blancato, chief executive officer of Ladenburg Thalmann Asset Management. “Institutions are not buyers here, they’re sellers and I think they’re seeing the split as a sign of weakness.”

It’s not just splits in the technology sector that have fallen flat. Medical-device maker Dexcom Inc. has dropped 28 per cent since announcing its split in March. Of the five companies in the S&P 500 Index that have split their stocks this year, only insurance company WR Berkley Corp. has seen its shares advance more than 3 per cent.

The jump in retail trading volume during the Covid-19 pandemic offered a compelling reason for companies to reduce their stock prices. So far, the splits appear to have been effective at attracting more mom-and-pop investors but it hasn’t been enough to overcome selling pressure. Retail trader order volume as a percentage of total market volume has jumped to 14.5 per cent for Amazon this month, compared with 3.8 per cent a year ago, estimates compiled by JPMorgan Chase & Co. show. For Alphabet, retail traders’ share of volume is at 8.2 per cent, compared with 2.8 per cent a year ago.

Despite poor post-split performance, companies don’t appear to be deterred. Tesla last month said it’s seeking shareholder approval for a 3-for-1 split in the form of a stock dividend after initially raising the prospect in March, less than two years after completing its 5-for-1 split.