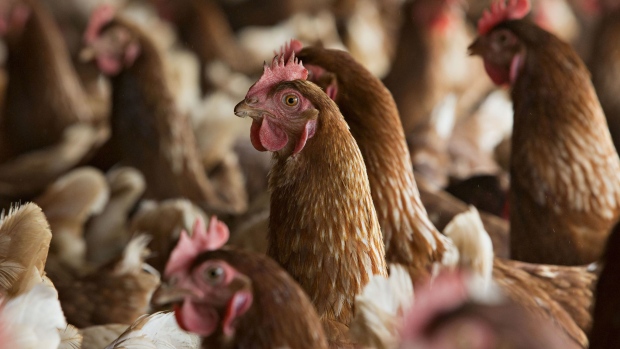 (Bloomberg) -- The U.S. chicken industry is poised to increase production of slow-growing birds after an influential animal welfare group said it would only certify such varieties.

The Global Animal Partnership, a food labeling program whose five-step welfare rating is championed by Amazon.com Inc.’s Whole Foods, on Wednesday released a list of 11 breeds of chicken that meet its higher standards for certification, down from 27.

The approved birds gain weight more slowly than the conventional ones that make up over 90% of the current market, and they have fewer health and meat quality problems, according to a study commissioned by GAP. Over 200 companies including Chipotle Mexican Grill Inc. and Popeyes Louisiana Kitchen Inc. have made “better chicken” commitments to comply with GAP by 2026.

Change won’t come easily. The bird breeds on the list comprise less than 5% of production, so U.S. poultry producers will need to scale up slow-growing chicken operations considerably to satisfy demand, according to Anne Malleau, executive director of GAP. Companies participating in the program can start planning now how to secure supplies and market the meat, she said.

“It’s a balancing act between what people want and what’s available,” Malleau said in an interview. “The way this initiative will be successful is if people start to transition as soon as they can.”

There are other challenges, too. A switch to slower growing birds means higher production costs and higher price tags for consumers. Americans are already facing food inflation, and there have been chicken shortages recently due to restaurant demand and meat-plant shutdowns during the Covid-19 outbreak. Producers of conventional chickens also say it takes more food and water to feed such birds.

Still, Americans are increasingly interested in animal welfare, and are more than ever willing to pay for food with ethical claims. GAP’s aim is not only to improve animal welfare but also reinvent the modern-day broiler chicken. Today’s chickens are able to convert feed into muscle mass very quickly, which produces meat efficiently but also can lead to hardships, like birds that struggle to walk.

Breeds that made the cut include those developed by Cooks Venture, Aviagen, Hubbard and Cobb-Vantress, which is owned by Tyson Foods Inc., the top U.S. chicken producer. Notably absent from the list are the most commonly used conventional birds.

Consumers should start to see small numbers of these approved animals in the marketplace, before there’s a bigger groundswell later, Malleau said. In addition, a label for chickens in GAP’s program is “in front of USDA.”

Matt Wadiak, chief executive officer of Cooks Venture, said the company’s Pioneer breed that won approval is “the culmination of over 12 years of research, and we’re proud the GAP study demonstrates the strength of our breed.” The company’s biggest asset is genetics that emphasize “both health and flavor,” he said.