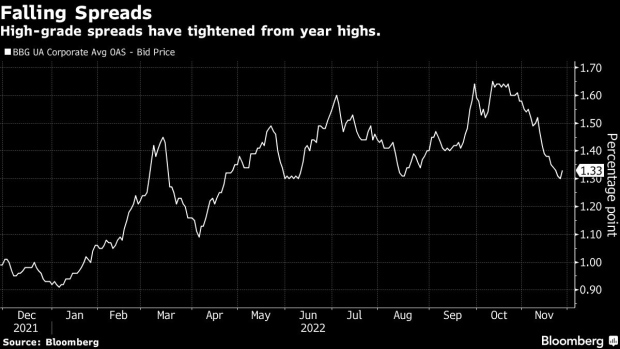 The online retailer was one of 11 companies in a busy bond market on Tuesday ahead of anticipated volatility. Federal Reserve Chairman Jerome Powell is scheduled to speak Wednesday, with key inflation data to follow Thursday and the monthly US employment report on Friday.

The company’s senior unsecured bonds sold in five parts, with the longest -- a 10-year security -- yielding 0.95 percentage points over Treasuries, according to a person with knowledge of the matter, who asked not to be identified as the details are private. Initial pricing talks called for a spread of 1.15 percentage points and an offering size of $7 billion, the person said, showing the bonds attracted big investor demand.

Proceeds may be used to repay debt as well as fund acquisitions and share buybacks, the person added. Amazon last sold bonds in April, raising $12.75 billion, which was the company’s first offering in about a year at the time.

“Its five-tranche bond offering, with initial price talk ranging from 45-115 bps over Treasuries for maturities ranging from 2-10 years, is tight to peers for good reasons, we believe, including the company’s dominant cloud and retail businesses, $59 billion of cash and potential for its credit profile (A1/AA/AA-) to continue to improve,” Bloomberg Intelligence analyst Robert Schiffman wrote in a note Tuesday.

He added that “with that amount of cash, funding isn’t needed, but it enhances duration and provides incremental firepower for potential additional M&A and larger share buybacks.” Amazon’s total debt load now exceeds $70 billion, according to Schiffman.

Investment-grade credit spreads are currently at 133 basis points, more than 30 basis points below the year’s peak of 165. The cost of issuing debt has also fallen since reaching a high in October, now sitting at 5.36%.

(Updates to show the bonds have been sold)