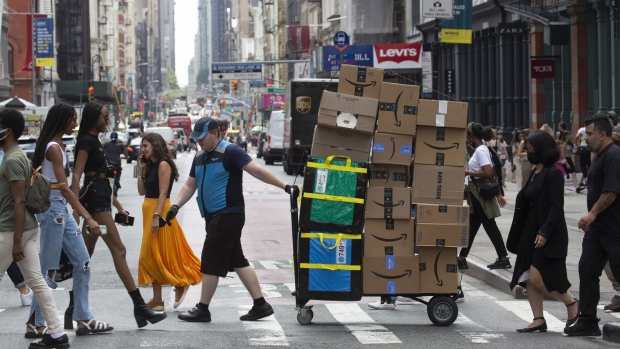 A worker delivers packages on Amazon Prime Day in New York, US, on Tuesday, July 12, 2022. Bargain hunters are expected to find Amazon.com Inc.'s two-day Prime Day sale underwhelming this year, with many sellers minimizing profit-eating discounts in an era of soaring costs. , Bloomberg

(Bloomberg) -- Amazon.com Inc. will let brands and merchants send marketing emails to shoppers, a risky bid to boost sales that could inundate inboxes with spam.

The company announced the initiative Wednesday at the Amazon Accelerate conference in Seattle, where it demonstrates new features to the independent businesses that sell more than half of the products on Amazon.com.

Merchants will be able to send free emails to new shoppers, repeat customers and their biggest spenders through a new “Tailored Audiences” tool, which will also let sellers monitor the results. The tool has been in testing this year and will be available to all US sellers in early 2023.

The move marks a break with Amazon’s historic reluctance to let independent merchants connect directly with customers for fear of alienating them. But online sales have slowed from their pandemic highs, and antitrust investigators are probing the power Amazon holds over millions of third-party vendors. Some merchants also say Amazon makes it hard to create a relationship with even their most loyal buyers.

Customers will have to unsubscribe if they don’t wish to receive the marketing emails.

“The downside is this could lead to a lot of spam, and I wonder how they’re going to manage that,” said Kirthi Kalyanam, director of the Retail Management Institute at Santa Clara University. “Retailers send so many emails, and shopper in-boxes get absolutely inundated.”

Despite the risks, merchants will probably embrace the initiative. This year US online sales will rise just 9.4% to $1 trillion, the first time growth has slipped into the single digits, according to Insider Intelligence. Some Amazon merchants are already bracing for a bleak holiday shopping season as inflation-hit consumers curb their spending and focus on such necessities as food and fuel.

The company captures 37.8% of all online spending in the U.S., six times more than its closest competitor Walmart Inc., according to Insider Intelligence. To maintain that edge as rivals improve their own e-commerce operations, the online behemoth is constantly rolling out new tools to help sellers and brands boost sales.

Amazon is also introducing a new question and answer feature that will let merchants connect with shoppers via its Alexa voice-activated platform. Shoppers asking such questions as “how can I remove pet hair from my carpet” can see and hear answers from merchants along with links to their products. The feature will be available to select merchants in October and launched to them all early next year.

“Many brand owners have spent years becoming experts in their product area and this an opportunity to connect customers with their brand,” Dharmesh Mehta, Amazon’s vice president of worldwide selling services, said in an interview.

The email marketing initiative pushes Amazon further into advertising, which founder Jeff Bezos initially resisted but has since become a fast-growing and profitable business. Advertising services generated $8.8 billion in Amazon’s second quarter, up 18% from the same period a year earlier.

In a precursor to the email marketing strategy, Amazon already lets shoppers follow favorite brands, which can then send them messages. The big difference is shoppers had to opt in to receive those messages. Now they’ll have to opt out.

Kalyanam suspects Amazon is encouraging more communication because it wants to help merchants glean deeper insights about their customers.

“These sellers can’t see any data about customers, and that must be creating problems for them,” he said. “If 90% of your sales are on Amazon, you are basically flying blind, and a dumb seller is not good for Amazon.”

(Updated with shares. A previous version of the story corrected the spelling of an Amazon executive in 11th paragraph.)