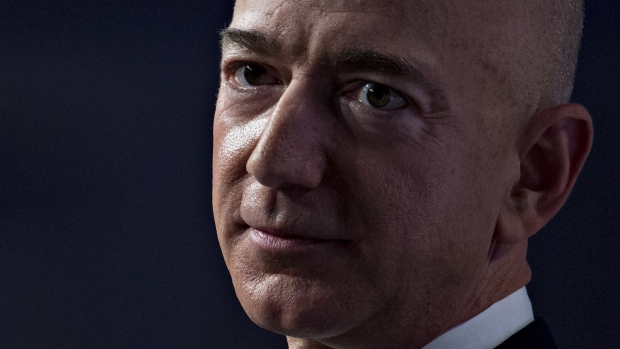 Acknowledging a steady drumbeat of criticism from activists and a vocal group of his own employees, Amazon.com Inc. founder and Chief Executive Officer Jeff Bezos announced the formation of a new organization, the Climate Pledge, to meet the goals of the landmark Paris climate agreement 10 years early.

“We have been in the middle of the pack on this issue,” Bezos said in Washington Thursday. “We want to move to the forefront. We want to be leaders.”

In a joint press conference with Christiana Figueres, formerly the United Nation’s executive secretary for climate change, Bezos said Amazon will reach 80 per cent renewable energy use by 2024 and 100 per cent by 2030, up from 40 per cent today. To help get there, Amazon has placed an order of 100,000 electric vehicles from a startup it has backed, Rivian Automotive Inc. The first Rivian vehicles will arrive in 2021.

Bezos’s pledge came a day before more than 1,500 Amazon employees are scheduled to walk out of their offices to draw attention to the company’s inaction on climate change. The protest is part of a wider strike organized by 16-year-old climate activist Greta Thunberg ahead of next week’s United Nations Climate Action Summit.

The group organizing the employee walkout, Amazon Employees for Climate Change, has been pressuring Amazon for almost a year to reduce its dependence on fossil fuels and detail how it’s preparing to deal with business disruptions caused by climate change. Inside Amazon’s annual meeting in May, an employee speaking on behalf of the group asked for the opportunity to share her concerns with Bezos directly, but was denied. Shareholders voted down their proposal for Amazon to disclose  a comprehensive climate change plan.

“We’re thrilled at what workers [have] been able to achieve in less than a year,” the group said in a statement. “But we know it’s not enough.”

The steps outlined in the Paris Climate Accords on their own aren’t sufficient to protect the planet, they said. “Today, we celebrate. Tomorrow, we’ll be in the streets to continue to fight for a livable future.”

In February, two months after the employees went public with their campaign, Amazon promised to disclose its carbon footprint by the end of the year and pledged that half its shipments would be carbon neutral by 2030, a so-called Zero Shipment project. Amazon has argued that an e-commerce model, with delivery vehicles making numerous stops in each neighborhood, is inherently more efficient than individual shoppers taking the odd trip to the store for items like a gallon of milk. Bezos added that free next-day shipping for Prime members, which the company is in the process of rolling out, is more environmentally efficient because products can be warehoused locally, reducing travel times and bypassing the need to ship products via air.

Over the years, the company has also developed wind and solar farms to power its data centers, experimented with more environmentally friendly packaging and offered ways for customers to pick a single day to receive multiple orders placed during the week.

Amazon is relatively late among tech companies to share its environmental impact. Apple has released an environmental impact report with increasing levels of detail for the last decade. Google first published a comprehensive report on its energy use in 2011.

Bezos recruited Figueres to co-found the Climate Pledge, which calls on companies to be net carbon neutral by 2040—a decade earlier than stipulated by the Paris Climate Accords. The pair said they would hold an annual conference for companies to share best practices for reducing their climate footprint. “Swallow the alarm clock,” she said. “We are running out of time. Science tells us we have about a minute left to get the work done we need to get done.”

Amazon on Thursday also announced a US$100 million donation to the Nature Conservancy to fund the Right Now Climate Fund, which engages in reforestation projects to remove carbon from the atmosphere.

Bezos started the press conference by reviewing the accelerating state of climate change, which he called “dire.” But he also said he was optimistic that society can invent a solution. “When invention gets involved, when people get determined, when passion comes out, when they make strong goals, you can invent your way out of any box. That’s what we humans need to do right now.”