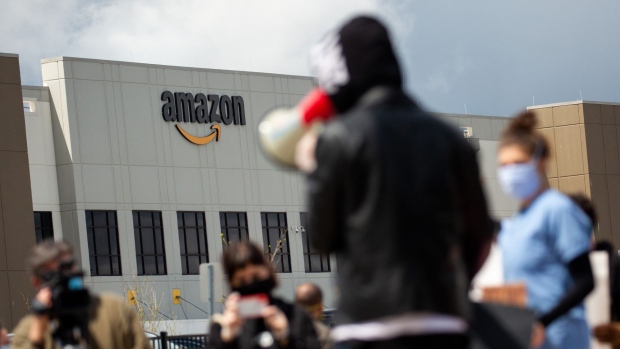 (Bloomberg) -- Unions representing tens of thousands of Amazon.com Inc. employees are planning walkouts and other action as the year’s busiest shopping season begins this week, in protest at the e-commerce giant’s handling of everything from sick pay and Covid-19 precautions to user privacy.The giant Verdi trade union in Germany is holding a walkout across seven Amazon facilities, it said in a statement Thursday. It’s part of the Make Amazon Pay campaign, an assemblage of organized labor, human rights organizations, environmentalists and other groups that are demanding changes at the Seattle-based company in a program of protests and online press conferences.

Garment workers in Bangladesh will call for higher pay outside an Amazon supplier facility in Dhaka. In Australia, unions will perform “health and safety” inspections of the company’s facilities using their “statutory right of entry,” the campaign said. Many workers’ groups, blocked from picket lines and protests due to pandemic restrictions, have been driven online. Others will project the campaign’s logo on buildings in Brussels, London, Sao Paulo and other cities.

Amazon is working “to make a positive impact as a progressive, innovative and sustainable business” for customers, partners and employees, the company said in an emailed statement. “Our jobs come with excellent pay, comprehensive benefits and great career opportunities, all in a positive, safe and modern working environment. We encourage anyone to compare our overall pay, benefits and workplace to other retailers and major employers across the world.”

In all, the organizations participating in the protests represent roughly 40,000 Amazon employees, according to a spokesman for the UNI Global Union, which represents millions of workers in industries including logistics and technology, and is helping organize the event.

Unions, particularly in Germany, Spain and France, have for years used the Black Friday shopping holiday as a rallying point for action against Amazon. Such protests have done little to dent the company’s dramatic growth. However, with criticism of its market power mounting, and the pandemic highlighting the plight of essential workers, some groups see a bigger opportunity this year to share their concerns.

In France, where unions have fought a battle over Amazon workers’ rights, the e-commerce giant has agreed to go along with other major retailers to postpone Black Friday. The move followed an outcry from smaller owners of physical stores who fear Amazon will take business from them during the country’s virus lockdown. Politicians including Paris Mayor Anne Hidalgo are calling for a boycott of the Seattle-based company for Christmas shopping.Make Amazon Pay -- which includes political, human rights and environmental groups such as Oxfam, Greenpeace and U.K. political movement Momentum -- presented Amazon with a list of demands including increased health-and-safety protections and worker representation, a lower carbon footprint at Amazon’s delivery and cloud operations and an end to its sale of “devices and software that expand mass surveillance,” such as the Ring camera and Rekognition facial-recognition service.

“During the Covid-19 pandemic, Amazon became a trillion dollar corporation,” Make Amazon Pay said in the letter. “Meanwhile, Amazon warehouse workers risked their lives as essential workers, and only briefly received an increase in pay.”In the U.S., the company’s employees aren’t represented by unions. Labor groups have tried to make inroads for years, without success. But that may be changing as Amazon’s workforce swells to more than 1 million, making it one of the largest private employers. A group of Amazon workers in Alabama recently filed a petition to organize.

Read More: Amazon Has a Europe Problem: Unions and Regulators Are Circling

The company has a history of guarding against unions’ influence. In September, it briefly posted a job listing for an analyst to research “labor organizing threats against the company” and to compile information that could be used to seek restraining orders against activists. An Amazon spokeswoman said at the time that the job posting was an inaccurate description of the role and had been corrected.

Vice reported recently that Amazon has been using operatives from Pinkerton, a private security agency, to collect intelligence on warehouse workers and to monitor labor unions and environmental activists, citing leaked documents. An Amazon spokeswoman told Vice that the company has an internal investigations team that works within the law and denied that it had hired “on-the-ground operatives.”

An Amazon spokesman said Thursday that the company respects employees’ right to join or form a labor union “without fear of retaliation, intimidation or harassment.”

Still, Amazon’s biggest problem this holiday season may be keeping up with demand.

Merchants around the U.S. have said some products that normally take a day or two to reach customers are taking a week or longer and they aren’t able to access the e-commerce giant’s faster, in-house logistics service. That suggests some of the company’s warehouses and delivery stations are at full capacity.