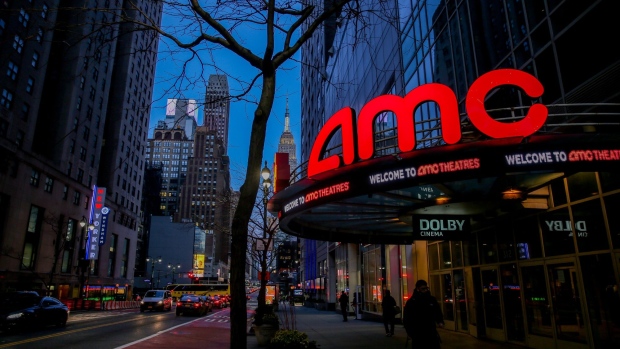 (Bloomberg) -- AMC Entertainment Holdings Inc. executives and directors sold $8 million in shares of the theater chain Thursday, cashing in on the soaring price of the most-popular meme stock.

Two board members and four executives sold at near record prices, following an eye-popping surge in the stock this week, regulatory filings on Friday showed. Among them were Gary Locke, a former Chinese ambassador who is up for re-election to the board at the company’s July 29 annual general meeting, and Carla Chavarria, the company’s head of human resources.

Among the six people who sold, Chavarria reported the highest proceeds -- $2.53 million after selling more than 40,000 shares at $62.67. The stock made an all-time high of $72.62 a day earlier. Others who sold include John McDonald, executive vice president of U.S. operations; Daniel Ellis, senior vice president of development; Elizabeth Frank, chief content officer; and board member Anthony Saich.

AMC has been in the spotlight all week, with internet day traders urging their peers to pump up the share price and send a message to Wall Street traders who have bet the stock will fall. While they’ve caused some pain to so-called short sellers, the lofty prices have also enriched hedge funds and rewarded company executives. They’ve even added to the wealth of the two sons of AMC Chief Executive Officer Adam Aron.

Aron himself has repeatedly said that he hasn’t sold any of his shares, including in an interview on YouTube Thursday, and has tied his fortunes to the success of the company. AMC raised more than $800 million this week selling new shares.

Shares of AMC fell as much as 13% to $41.50 in extended trading after the filings were made. They gained 83% for the week through the Friday close in New York.