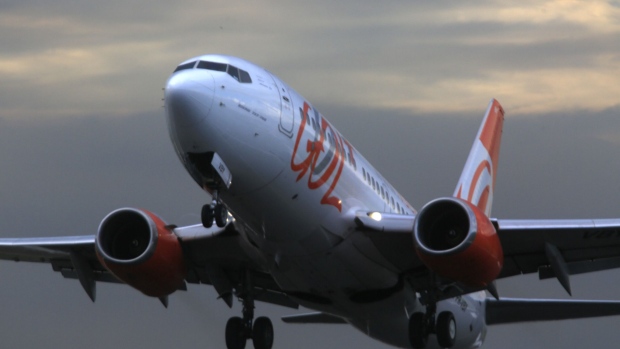 A Gol Linhas Aereas Inteligentes SA jet takes off at the Santos Dumont Airport (VCP) in Rio de Janeiro, Brazil, on Tuesday, March 31, 2015. Brazil's airlines resemble U.S. carriers a decade ago, before a recession and high fuel prices forced consolidation and cost cuts, said Rob Pickels, an analyst and portfolio manager at Manning & Napier. The Brazilian industry will go through a similar process that will leave it more financially sound, he said. Photographer: Dado Galdieri/Bloomberg , Mary Schlangenstein and Vinícius Andrade

The two will work together in areas including purchasing, sales tools and systems integration as allowed by regulatory and other limits, American said in a statement Wednesday. The U.S. carrier will invest in 22.2 million newly issued Gol preferred shares in exchange for a 5.2% “participation in the company’s economic interest,” and will gain the right to name a director to the Brazilian airline’s board. A spokesperson for American Airlines did not immediately respond to a request to clarify the share ownership.

“Investors are likely to view today’s news as a major positive for Gol,” Josh Milberg, a Morgan Stanley analyst, said in a report Wednesday. “It is a substantial show of confidence by American in Gol’s future.”

American’s investment “suggests that the U.S. carrier could be a source of additional financial support for Gol if needed in the future,” he said.

The agreement builds on an initial marketing, or codeshare, established in 2020 after a previous South American partner was snatched away from American by Delta Air Lines Inc. It will allow customers to travel to more than 30 cities served by American in the U.S. and over 20 new destinations served by Gol in South America. The expanded relationship follows American’s agreement to buy a stake in JetSmart Airlines SpA, a privately held, low-cost carrier based in Chile.

“We believe that this will bolster Gol’s presence in international markets, accelerate our long-term growth and maximize value for our shareholders,” Gol Chief Executive Officer Paulo Kakinoff said in a statement. “It adds to our confidence in the company’s growth as the economy reopens and travel demand increases.”

Gol was expecting to report total liquidity of 4.2 billion reais ($799 million) in the fourth quarter as it recovers from the decline in travel during the coronavirus pandemic. That may now jump to about 5.2 billion reais, Bradesco BBI analyst Victor Mizusaki estimates.

This “should be enough to overcome the Covid-19 pandemic,” he wrote in a report, reiterating a neutral rating for the stock but increasing his price target to 27 reais from 26.

American will pay $9 per preferred share as of Tuesday, Gol said. Other holders of the airline’s preferred shares, including those traded as American depositary receipts, will be able to exercise preemptive rights to subscribe for a portion of the newly issued shares, it said in the statement.

The letter of intent must be finalized and receive regulatory and other approvals.