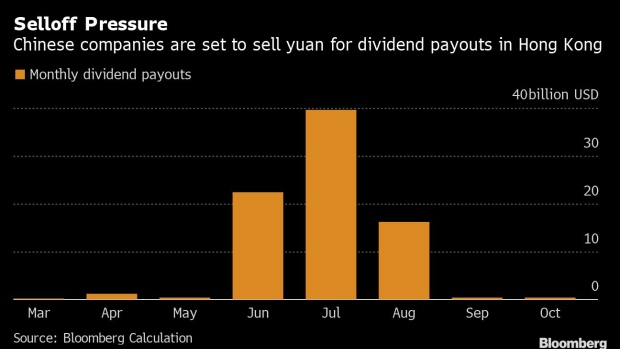 (Bloomberg) -- Having plunged by the most on record in offshore trade last month, China’s yuan is now facing the threat of selling pressure from the nation’s companies.

Chinese firms are poised to ramp up dividend payments in coming months, with more than 500 Hong Kong-listed companies to hand out around HK$677 billion ($86.2 billion) this year, according to data compiled by Bloomberg as of Thursday. This summer’s June-August peak is set to be 16% higher in terms of payment size than the same period in 2021.

As capital outflow concerns mount and strict Covid lockdown measures wreak havoc on China’s economy, a potential wave of yuan selling by companies to pay dividends in foreign currency could exert further downward pressure. The offshore yuan fell more than 4% in April as the dollar surged, in its biggest monthly decline on record.

“FX settlement demands could be amplified given how weak current sentiment is toward the yuan,” said Tommy Xie, an economist at Oversea-Chinese Banking Corp. in Singapore. Chinese companies will be less inclined to execute a previously popular strategy of selling a rising dollar versus the yuan, as expectations have shifted toward further yuan depreciation, he added.

State-owned banks led by China Construction Bank Corp. and tech giant Tencent Holdings Ltd. are among the ten most generous dividend issuers, making up 49% of Chinese H-share payments scheduled to be paid this year. Most of these companies have increased dividend payouts from last year, according to data compiled by Bloomberg.

Such gestures may help retain investors given the fragility of Chinese markets. The Hang Seng China Enterprises Index is down 14% this year, while outflows have accelerated across various asset classes amid a growing list of risks. Global funds cut their holdings of Chinese bonds by the most on record in March.

As Asia’s worst performer versus the dollar in the past two weeks, expectations are for further depreciation with the yuan “perhaps breaking 7 at some point,” UBS AG economists including Tao Wang wrote in a recent note. It traded at around 6.65 per dollar offshore on Thursday.

To be sure, companies may have flexible arrangements to obtain the foreign currency they need, meaning that flows from related FX purchases may not necessarily be synchronized with dividend payout schedules.

One beneficiary of the payout demand could be the Hong Kong dollar. It is trading near its weakest since 2019 versus the greenback and is close to the limit of its currency peg -- a level that can warrant intervention from the city’s monetary authority.