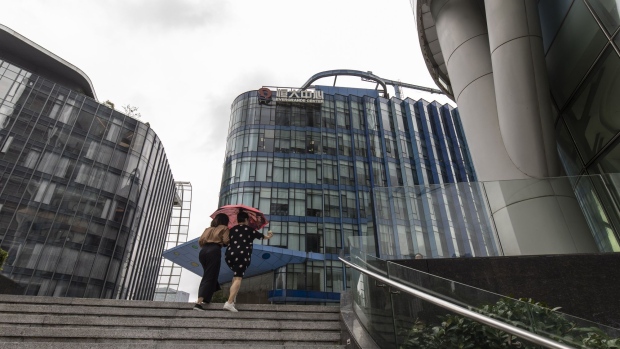 China Evergrande Group's Evergrande Center in Shanghai, China, on Wednesday, Sept. 15, 2021. Chinese authorities have told major lenders to China Evergrande Group not to expect interest payments due next week on bank loans, according to people familiar with the matter, taking the cash-strapped developer a step closer to one of the nation’s biggest debt restructurings. , Bloomberg

(Bloomberg) -- As a potential restructure for China Evergrande Group edges closer to reality, its bondholders will face an unprecedented challenge advocating for their interests.

With 13 outstanding dollar bonds, including one note touted as one of the most widely traded in the world, and a diverse group of bondholders globally, getting organized is going to be tricky.

Kirkland & Ellis LLP and Moelis & Co. have been hired as advisers by some holders, Reorg reported, but it’s likely that other legal and financial advisory firms will be hired too, leading to multiple groups of stakeholders within the cohort of international buyers. There may even be some rivalry between these groups based on the tranche, tenor and seniority of the bonds they hold.

Bondholders have had some success in organizing themselves in recent years -- for instance in a high-profile case at Peking University Founder Group -- but it remains to be seen if those efforts will pay off. In China’s nascent distressed debt market, there have been relatively few opportunities for this type of action compared to the U.S. or Europe.

That challenge will be magnified given the scale and complexity of Evergrande’s operations and the involvement of Chinese authorities, given the concerns over systemic risk.