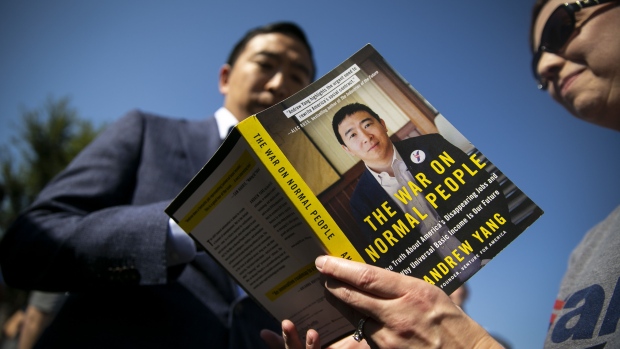 Except this time the product isn’t some new gadget or app, it’s a presidential candidate.

Since he began his unorthodox campaign for the 2020 Democratic nomination, New York entrepreneur Andrew Yang has broken with a lot of traditional advice about campaign proposals, fundraising and public relations. And so far, it’s kind of worked.

Endorsements from big names like Elon Musk, along with many small individual donations from software engineers—among the biggest givers to his campaign—have catapulted him into the middle of the winnowing pack of remaining Democratic candidates. He’s managed to win over the tech industry’s support while making its negative impact on society his central focus, and he’ll be on the debate stage on Thursday night, trying to convince everyone he can fix it.

An outsider with zero political experience, Yang has outlasted a senator, two governors and three members of the House in the crowded Democratic field. He’s currently beating two senators, former liberal heartthrob Beto O’Rourke and Tom Steyer, the billionaire burning through his own cash while floundering in the polls. And Yang’s fundraising and poll numbers were strong enough to qualify for nationally televised debates three times.

But it’s the next phase that proves trickiest, in both tech and politics. Yang, who is currently at 2.5% in a Real Clear Politics aggregation of polls, needs to scale up quickly, building more name recognition and financial support before the primary season starts. In short, it’s time for Yang to go public.

His plan to do so involves a campaign centered on one big idea: a $1,000 check sent monthly to every U.S. citizen over the age of 18, no strings attached. But he’s also touting more than 150 other proposals such as legalizing marijuana, creating a postal banking system, paying college athletes, eliminating the penny and making Puerto Rico a state.

It’s those ideas that make more traditional pundits view Yang as a fringe candidate—Yang is undoubtedly the first presidential campaign to have taken a stance on circumcision, even if he later backtracked on it. But an embrace of oddball causes may also be part of the secret to Yang’s success so far.

Connor Farrell, a progressive fundraising consultant for Left Rising in Washington, D.C., said that Yang’s campaign features the kind of niche ideas with passionate fan bases that drive online donations. Those voters can be reached much more efficiently through free viral videos and memes than can, say, potential supporters of former Vice President Joe Biden who prioritize electability. And they’re easier to convert into small-dollar donors who can be tapped again and again, Farrell said.

“Candidates who advertise about a specific issue have an easier time targeting the people that are likely to give to them,” he said. “You’ll make more money spending less money.”

Yang recently sat down with Bloomberg in a cramped conference room in San Francisco to talk about his ideas. Surrounded by stacks of his book The War on Normal People, the former tech entrepreneur quickly launched into his case that the tech sector bears responsibility for many of America’s problems.

Retail jobs vaporizing and shopping malls closing? That’s Amazon. Suicide and mental health issues on the rise? That’s Facebook. Journalism on the decline? Google’s ad network carries a bunch of responsibility for that.

And, he argues, there’s worse to come, as automation comes for clerical, call center, retail, food preparation and trucking jobs.

And then he turns to his solution, which his campaign calls the Freedom Dividend but Yang informally describes as a “tech check.” To help pay for its estimated $4 billion cost, he wants to ditch corporate taxes on earnings and instead institute a value-added tax, or VAT, a tax on consumption. The VAT is used by a majority of developed counties, but is considered a non-starter in the U.S. for both parties: Republicans look at it as a tax hike, and Democrats believe it’s regressive because poor people’s consumption represents more of their income. Yang argues that if the tax were set at 10% (or about half the amount Europe charges) it would easily cover his $12,000 annual stipend for every American.

While Yang believes the tech sector has created a lot of problems, he also thinks it’s uniquely positioned to solve some.

Yang wants to allow voting by mobile phone using blockchain security. He favors net neutrality, letting consumers have a property right to their own data and increased investment in quantum computing and encryption technologies. He wants to bolster artificial intelligence to remain competitive with China and create a new agency to monitor the addictive nature of smartphones and social media.

And, more importantly, he doesn’t rail against the companies’ creators themselves. It’s a neat trick: He vilifies the effects of innovation while absolving the innovators, saying that’s a job for government regulators.

“This is a natural place where the government needs to come in and set parameters,” Yang told Bloomberg. “If you ask [tech companies] to self-regulate, they would literally be doing their shareholders a massive disservice if they were to scale back in any meaningful way.”

To help garner support for such policies, Yang wants to create an agency to educate elected officials on artificial intelligence, data privacy, online ad networks and other technology topics they often don’t understand but are expected to craft laws to regulate. Such misunderstanding, he suggests, is what led candidate Elizabeth Warren to propose a break up of big tech earlier this year.

“She’s recommending 20th century solutions to 21st century problems,” he said of Warren. “It’s not like breaking Google up into four mini-Googles would somehow improve the marketplace because no one wants to use the fourth best search engine. There’s a reason why we’re not using Bing.”

Yang has early roots in the tech industry. He grew up in upstate New York, a self-described nerd who often spent more time with computers than people. His father, who worked at International Business Machines Corp. and generated 69 patents, encouraged his son’s early interest in technology. After Yang earned a law degree from Columbia University, he found he didn’t like being a lawyer and launched a startup allowing people to donate to celebrities’ favorite charities (it failed), then he drifted to a health care startup and eventually joined an online test prep company as an employee. By the time test titan Kaplan Test Prep bought it a few years later in 2009, Yang had risen to become its chief executive. He used part of his windfall to start a non-profit called Venture For America, matching recent college graduates with tech startups in sometimes-overlooked cities like St. Louis, Detroit and Pittsburgh.

The people most likely to donate to Yang’s campaign have job titles like programmer, developer and software engineer. Many of them have jobs at Alphabet Inc.’s Google, Amazon.com Inc. and Microsoft Corp., but Yang also has a steady stream of contributions from workers with the same jobs at companies around the country, such as Capital One Financial Corp., Northrop Grumman Corp. and Walmart Inc.

Workers at tech firms contributed $321,664 to Yang through the end of June, according to data from the Center for Responsive Politics. That was less than the $1.3 million the sector gave to Pete Buttigieg, tops among Democratic presidential candidates, and about as much as Joe Biden, who is polling far higher but whose late entry into the race gave him less time to raise money.

Like most of his rivals, Yang's big three locations for raising money are the New York, Los Angeles and San Francisco metro areas, but tech enclaves rank higher on his list than they do for other candidates. Seattle is fourth and the San Jose-Sunnyvale-Santa Clara metro area—the heart of Silicon Valley—is seventh.

Richard Shank is one of those donors. A software developer in Beaverton, Ore., he was working on a project to automate school scheduling and listening to a Ray Kurzweil audiobook a few years ago when he had a realization that automation was going to cause a lot more disruption to the economy.

After reading more on the issue, Shank, 50, settled on the universal basic income—sometimes called UBI, or in Yang’s case, the “tech check”—as a solution. He backed Vermont Senator Bernie Sanders in 2016 in part because he’d said favorable things about the idea, but when he heard Yang on Sam Harris’ podcast, Shank had finally found his candidate.

“I was immediately sold,” he said. “UBI is probably the single most important issue in this race.”

Shank listened to the audiobook of The War on Normal People and checked out every podcast interview with the Yang that he could find. He sets aside a portion of each paycheck to send to Yang’s campaign, and is about $1,000 toward his goal of hitting the Federal Election Commission maximum of $2,800.

Neil Malhotra, a political economy professor at the Stanford Graduate School of Business, has studied political attitudes in Silicon Valley and the tech sector. One study of tech founders in Silicon Valley found that they favor low regulation to allow businesses to innovate but they also support redistributing wealth and are liberal on social issues. A separate study found similar attitudes among computer science majors at Stanford.

“If you look at the Yang campaign, it’s very consistent with what we found,” Malhotra said.

Yang may not like social media’s effects on society, but his campaign is certainly benefiting from them. Online, fans have blended his image with funny and sometimes outrageous messages that spread fast on Twitter and Reddit as well as more controversial sites like 4chan. Yang’s campaign staff say they try to keep tabs on the ever-multiplying memes, but have no control over what gets published, where or how fast it spreads.

“As important as social media and everything is, the core driver is still email and fundraising,” said Digital Director Eric Ming, who leads the campaign’s efforts in social media, digital advertising, email and online engagement. He said he and his team don’t generally make memes, but see the power of the images in real time.

When a meme strikes a chord, like the image of a boyfriend doing a double take on a new girl (Yang) while walking with his girlfriend (Trump), it spreads quickly, contributing to the candidate’s digital fame. One clip of Yang dancing the Cupid Shuffle in a women’s exercise class got 1.6 million views. A slow-motion video of Yang standing barefoot on his deck kicking off a water bottle cap without knocking over the bottle got 1.4 million. Another video shows supporters hoisting him above their heads, enabling him to crowdsurf his political rally like a rockstar.

They may seem trivial, but like any media appearance, viral clips can drive voters to learn more about the candidate. These images play an outsized role in driving political decisions, according to Joel Penney, an associate professor at Montclair State University and author of The Citizen Marketer: Promoting Political Opinion in the Social Media Age.

Penney described memes as amateur-produced political ads that played a “massive” role in helping Trump win the last election. Their power, he says, lies in their simplicity. It’s an easy way of consuming often complex information that’s easy to share, is topical and hits emotional triggers.

To contact the authors of this story: Lizette Chapman in San Francisco at lchapman19@bloomberg.netRyan Beckwith in Washington at rbeckwith3@bloomberg.net

To contact the editor responsible for this story: Wendy Benjaminson at wbenjaminson@bloomberg.net, Brad Stone