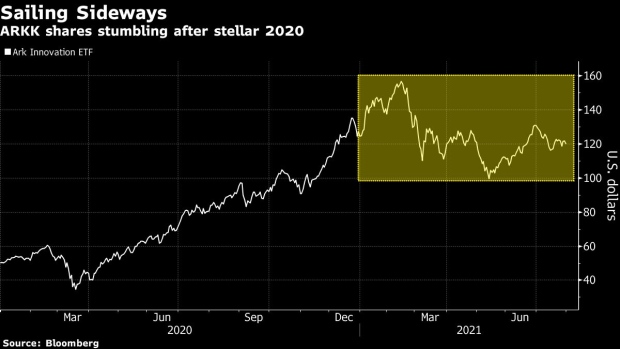 (Bloomberg) -- Those who think Cathie Wood’s hot hand is cooling may soon be able to express that view via an exchange-traded fund.

The Short ARKK ETF would seek to track the inverse performance of the $23 billion Ark Innovation ETF (ticker ARKK) -- the largest fund in Ark Investment Management’s lineup -- through swaps contracts, according to a filing Friday with the U.S. Securities and Exchange Commission. The fund would trade under the ticker SARK and charge a 0.75% operating expense, in line with ARKK’s fee.

If launched, SARK would serve as a bold bet against one of 2020’s most successful managers. ARKK surged roughly 150% last year with Wood at the helm, frequently doubling down on Tesla Inc. and other high-flying technology shares. However, some of the fund’s hottest stocks have since weighed on its performance as the market’s speculative fervor settles -- ARKK is underwater by 3.6% in 2021, versus the S&P 500’s 17% gain.

SARK would be managed by Matt Tuttle, chief executive officer at Tuttle Capital Management LLC, an issuer of thematic and actively-managed ETFs.

“In sum, as ARKK already represents a long exposure to a basket of unprofitable tech stocks, we thought that investors should have access to the short side as well,” Tuttle wrote in an email. “Keep in mind there are a lot of non institutional investors, that cannot short stocks or ETFs or they may have trouble finding a borrow to put on the short.”

A representative for Ark didn’t immediately respond to a request for comment.

Those betting against ARKK via more traditional channels have been boosting those wagers recently. Short interest in the fund is currently 4.6% of shares outstanding, down slightly from a record 5.3% in March, according to data from IHS Markit Ltd.