Apple Inc. shares fell on Thursday, with the stock now about 22 per cent below its January peak as a selloff in technology stocks spreads from more speculative shares to the world’s biggest companies.

The stock fell 2.7 per cent to US$142.56 and is trading at its lowest since October. Apple’s slump has erased about US$700 billion in market value since the Jan. 3 record, a slump that enabled Saudi Aramco -- which has benefited from this year’s surge in oil prices -- to overtake the tech giant as the world’s most valuable company earlier this week.

The widespread tech weakness has been spurred by concerns about inflation and rising interest rates. The Nasdaq 100 Index has fallen almost 6 per cent over the past four days, on track for a sixth-straight negative week, its longest losing streak since 2012.

“Sentiment is very depressed, and uncertainty surrounding inflation is going to continue to complicate the picture,” said Keith Lerner, co-chief investment officer and chief market strategist at Truist Advisory Services. “Even though prices are getting cheaper, we need a spark to start moving us up, and I don’t see one.” 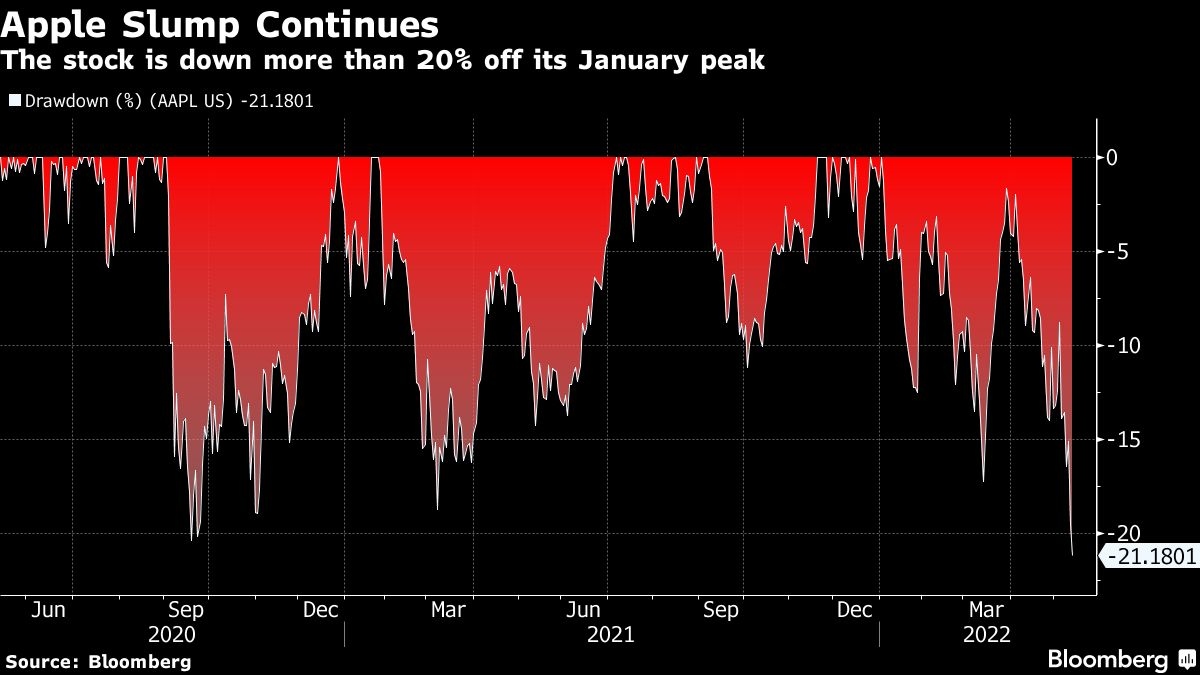 While the tech-heavy Nasdaq 100 has been under pressure all year, Apple’s decline has been relatively recent. The stock has fallen nearly 10 per cent this week alone amid mounting concerns about an economic slowdown. It’s a sudden turnaround for Apple from about six weeks ago, when shares were trading close to a record.

The stock is on track for a seventh straight weekly drop, which would represent its longest such streak since November 2018.

Apple continues to face supply chain challenges that the company predicted would cost US$4 billion to US$8 billion in revenue during the current quarter. Still, its strong balance sheet, hefty profits and loyal customer base has insulated it from some of the turmoil in the tech sector.

The stock is still outperforming the tech-heavy Nasdaq 100 index, which has lost nearly 30 per cent of its value this year, compared with Apple’s year-to-date decline of about 19 per cent.

Lerner suggested that the weakness in Apple and other big-tech names could be a sign of a bottoming process in markets. “You want to see the generals fall to find a good bottom, so this could be a positive from that perspective, though we can always get more oversold.”