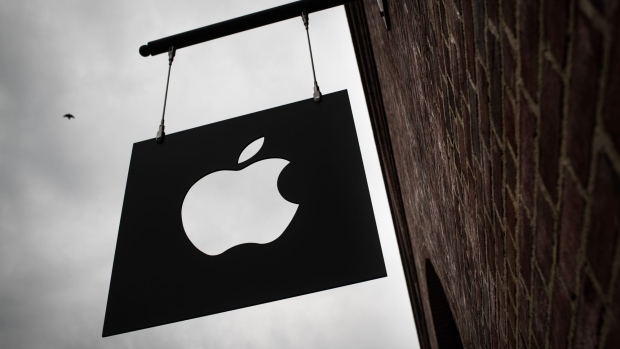 Apple Inc. signage hangs outside of the company's Williamsburg store in the Brooklyn borough of New York, U.S., on Friday, May 20, 2017. Apple Chief Executive Officer Tim Cook said in May that the company planned to invest at least $1 billion to back advanced manufacturing companies in the U.S. and help create jobs in the industry. Photographer: Mark Kauzlarich/Bloomberg , Bloomberg

(Bloomberg) -- US labor board prosecutors have determined that Apple Inc. violated federal law by interrogating and coercing employees in Atlanta, the latest legal salvo over the company’s response to organizing efforts.

The Communications Workers of America petitioned for a unionization election at the Atlanta store earlier this year, but in May withdrew its petition the week before the planned vote, citing alleged misconduct by the company.

“Apple executives think the rules don’t apply to them,” the group said in a statement Monday. “Holding an illegal forced captive audience meeting is not only union-busting, but an example of psychological warfare. We commend the NLRB for recognizing captive audience meetings for exactly what they are: a direct violation of labor rights.”

Apple, the world’s most valuable company, has been facing an unprecedented wave of organizing at its retail stores this year. Staff at a Maryland location voted in June to unionize with the International Association of Machinists, and their counterparts in Oklahoma City opted in October to join the CWA.

Organizers suffered a setback last month in St. Louis, where IAM withdrew a unionization petition the week after filing it, blaming the company’s behavior. Some employees at the location later complained about the process, saying they felt the election was rushed. But workers at dozens more of Apple’s roughly 270 US stores have been discussing unionization, according to employees.

An NLRB regional director in New York issued a complaint against Apple in September, accusing the company of interrogating staff at a World Trade Center store and discriminating against union supporters in enforcing a no-soliciting policy. Apple said following that complaint that it disagreed with the allegations.

While the NLRB has previously held that companies can require employees to attend anti-union meetings, the agency’s current general counsel, Jennifer Abruzzo, views such “captive audience” gatherings as inherently coercive and illegal. Her office is pursuing cases that could change the precedent, including at Amazon.com Inc. and Starbucks Corp., both of which have denied wrongdoing.

Complaints issued by NLRB regional directors are considered by the agency’s judges, whose rulings can be appealed to the board’s members in Washington, and from there can go to federal court. The agency can require remedies, such as posting of notices and reversals of policies or punishments, but it has no authority to impose punitive damages on companies.