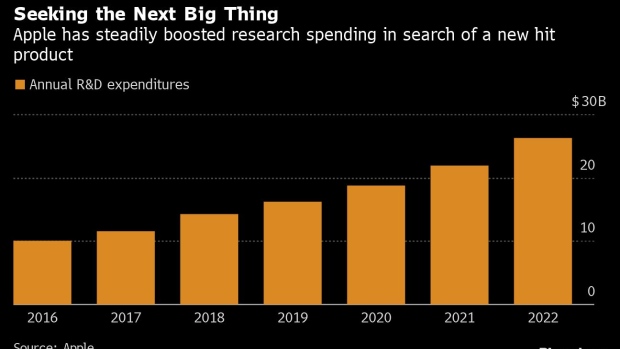 (Bloomberg) -- Apple Inc. has scaled back ambitious self-driving plans for its future electric vehicle and postponed the car’s target launch date by about a year to 2026, according to people with knowledge of the matter.

The car project, dubbed Titan inside the company, has been in limbo for the past several months as Apple executives grappled with the reality that its vision for a fully autonomous vehicle — without a steering wheel or pedals — isn’t feasible with current technology.

In a significant shift for the project, the company is now planning a less-ambitious design that will include a steering wheel and pedals and only support full autonomous capabilities on highways, said the people, who asked not to be identified because the information is private.

The latest changes underscore the challenge Apple faces in pushing into an entirely new product category and taking on technological obstacles that have bedeviled some of the world’s biggest companies. The secretive project, underway for years, is meant to provide Apple with another major moneymaker, but it also could test the limits of the iPhone maker’s capabilities.

Apple currently plans to develop a vehicle that lets drivers conduct other tasks — say, watch a movie or play a game — on a freeway and be alerted with ample time to switch over to manual control if they reach city streets or encounter inclement weather. The company has discussed launching the feature in North America initially and then improving and expanding it over time.

A spokeswoman for Cupertino, California-based Apple declined to comment.

Apple shares, already down about 2% on Tuesday, dipped to a session low after Bloomberg News reported on the changes. They’ve declined 19% this year, though that’s a better performance than most stocks in the tech-heavy Nasdaq Composite Index.

Apple’s previous vision for the car was to offer “Level 5” autonomy — the pinnacle of self-driving technology, which no automaker has attained. The current plan is considered below that because of its more limited scope.

It’s the latest strategy shift for the Apple car team, which has faced turnover in its executive ranks ever since its inception a decade ago. Current leader Kevin Lynch has aimed to bring more stability and a focus on practical goals after years of priority changes and even some layoffs.

Lynch, who also is in charge of the Apple Watch operating system and health software, took over at the end of 2021. He initially instructed the team working on the car, known as the Special Projects Group, to focus on a fully autonomous vehicle for a debut by 2025. Now he’s dialing back those expectations, but with the goal of ensuring that a product actually reaches the market.

The heart of Apple’s technology is a powerful onboard computer system — codenamed Denali after the tallest mountain peak in North America — and a custom array of sensors. The processor’s performance is equal to about four of Apple’s highest-end Mac chips combined and is being developed by the company’s silicon engineering group. The chip has reached an advanced state and is considered nearly production-ready, though Apple may scale it down before the car’s launch to lower costs.

Having an onboard computer to handle automated tasks is similar to an approach used by other carmakers, including Tesla Inc. Apple, however, plans to differ from Tesla by using a combination of lidar and radar sensors, along with cameras. The setup helps the car determine its location, see driving lanes, and assess how far it is from other objects and people. Tesla relies on cameras, while Alphabet Inc.’s Waymo and others use a combination.

In addition to the onboard hardware, the system has a cloud-based component for some artificial-intelligence processing. Apple is relying on Amazon Web Services for hosting, costing the iPhone maker about $125 million per year. But that’s just a sliver of the roughly $1 billion the company is spending on the car project annually.

Apple is exploring the idea of a remote command center to assist drivers and control cars from afar during emergencies. The company is also discussing offering its own insurance program to customers.

Apple had expected each car to sell for more than $120,000, but the company is now aiming to offer the vehicle to consumers for less than $100,000, according to the people. That would put it in roughly the same price range as the entry-level version of the Model S from Tesla and the EQS from Mercedes-Benz.

Apple hasn’t yet settled on a design for its car and the vehicle is considered to be in the “pre-prototype” stage. The company is aiming to ready the design by next year and have the features set by the end of 2024. It then plans to put the car through extensive testing in 2025.

Apple had previously discussed launching a car that looks similar to Canoo Inc.’s Lifestyle Vehicle. The idea was to have a limousine-like interior where passengers could face each other. Now the plan is to produce something more like a traditional car, with a driver’s seat.

The company has held discussions with a number of suppliers about obtaining an electric-vehicle platform, known in the industry as a “skateboard,” but it’s still seeking a partner. Apple earlier talked to several companies about licensing their platforms, but the only serious negotiations occurred with Volkswagen AG several years ago. EV platforms include the underlying base of the car, the wheel system and battery.

The design of the car is being led by Ulrich Kranz, the ex-chief executive officer of Canoo, as well as former managers from Tesla, Lamborghini and Porsche. The software side of the system is led by former Tesla manager Stuart Bowers, while safety engineering, testing and regulatory matters are handled by ex-Ford Motor Co. executive Desi Ujkashevic.

The Apple car organization, made up of about 1,000 employees, is split across campuses in Sunnyvale, California; Ottawa; Zurich; and Arizona. Much of the underlying engineering work, industrial design and software development is done in Sunnyvale, while parts of the car’s future operating system are developed in Ottawa, an area where the company poached workers from BlackBerry’s QNX, a longtime maker of car software, in 2016.

The company’s team in Zurich is developing a tool known as “Rocket Score” that grades the vehicle’s autonomous system. That core team faced a setback earlier this year when Ian Goodfellow, a prominent developer of AI technology who helped lead the group, left Apple after complaining about its work-from-home policies.

Much of the testing work for the car is done at a former Chrysler track outside of Phoenix. The testing area, codenamed “Sahara,” was purchased by a business representing Apple in 2021 for $125 million. The company also continues to test its driving system on Lexus SUVs deployed in several states. Those cars, known internally as “Baja” vehicles, get their onboard systems refreshed every 6 to 12 months.

In Silicon Valley, Apple is aiming to consolidate several of its car teams in a new campus by the San Jose airport known as Orchard Parkway. The property will have about half a million square feet of space and may also house other Apple teams. The company bought the campus around 2015 and kicked off construction last year.

(Updates with shares in seventh paragraph.)