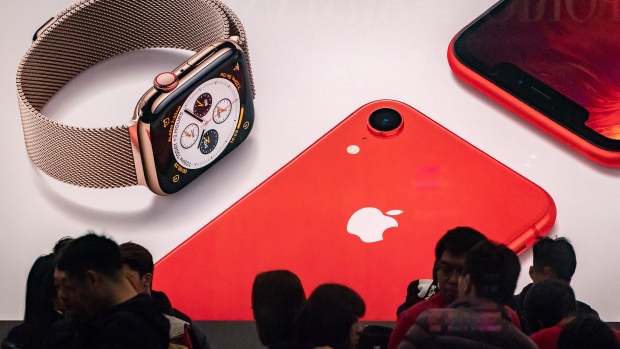 Apple Inc. shares closed at a record on Friday as investors looked past a year marked by turmoil from the U.S.-China trade war and uncertain demand for the iPhone, a product that Apple is moving away from, but which remains central to its business.

The stock rose 2.7 per cent to US$236.21 in New York, exceeding the prior high set just over a year ago. The move made Apple the most-valuable U.S. company again, topping Microsoft Corp. Both have a market value of more than US$1 trillion. Earlier, the U.S. and China agreed on the outlines of a partial trade accord.

The record is the culmination of a pronounced rally throughout 2019, a year that started on a highly bearish note, as Apple cut its revenue outlook for the first time in nearly 20 years. That move, taken in response to a weak outlook for iPhones upgrades and China’s economy, took the stock to its lowest level since April 2017.

Since then, however, shares have been on a nearly uninterrupted march higher, with the stock higher in seven of the past nine months, not including October’s month-to-date gain of about 4 per cent. Apple has climbed more than 60 per cent off its January low, returning its valuation back above US$1 trillion.

Just as Apple’s weakness in the fourth quarter of 2018 was largely driven by concern over iPhone demand, the 2019 recovery has come on an easing of those fears. CEO Tim Cook recently told the German newspaper Bild that he “couldn’t be happier” with the launch of Apple’s recently released iPhone 11, and it was reported in early October that Apple had told suppliers to increase production. Analysts, in turn, have been growing more positive on demand, while also anticipating that next year’s model -- expected to be the first 5G version -- will be a blockbuster.

In other respects, Apple is a different company from when it was last trading at all-time highs a year ago. The Cupertino, California-based firm is reinventing itself as a services-based company, with such initiatives as streaming video, video games and a credit card. In another change, the historically high-end gadget-maker unveiled these new businesses and products at less-aggressive prices.

Despite the new-found focus on services, the iPhone continues to be Apple’s keystone product. Nearly half of its third-quarter revenue came from the product, compared with the 21.3 per cent that was derived from services.

Apple is expected to report fourth-quarter results on Oct. 30. Analysts are looking for earnings of US$2.84 a share on revenue of US$62.9 billion, according to data compiled by Bloomberg. That represents a decline of 2.6 per cent for earnings and flat sales growth.

According to a Bloomberg MODL estimate, it will ship 41.9 million iPhones in the quarter, at an average selling price of US$770.35. That would represent a year-over-year drop of 14.5 per cent for shipments, and a 3.1 per cent decline in average price.