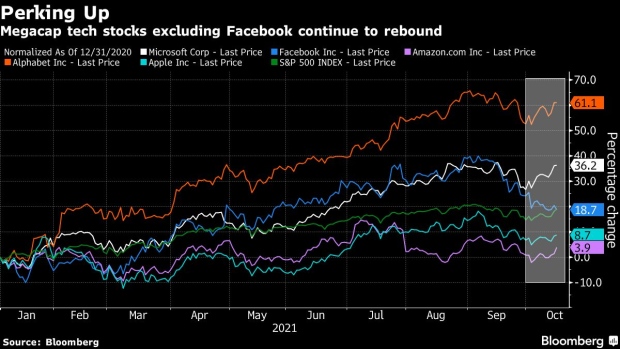 (Bloomberg) -- Component shortages that have derailed revenue forecasts across the corporate universe came calling for Apple this week. The response from shareholders? They bought more of the stock.

Apple shares were up 0.5% on Friday and are set to wrap up their best week in six, despite expectations that the tech giant will deliver millions fewer iPhone 13 devices this year than originally planned due to supplier constraints. The shortfall could total as many as 10 million units, people with knowledge of the matter said.

Investors’ phlegmatic response to the reports suggests many had expected the supply chain disruptions and are convinced that sales aren’t being lost, just delayed. Morgan Stanley’s Katy Huberty actually encouraged investors to buy Apple shares, saying the company’s size and importance to suppliers means the shortages will hit its rivals harder.

“If Apple can’t meet near-term demand, the shortfall is likely to be even greater at competitors, creating an opportunity for share gains,” she wrote in a research note.

The rally in Apple’s shares could also be a sign that the stock -- along with others in the megacap group -- is finding a footing after a big selloff fueled by the jump in Treasury yields. Apple has now advanced for two consecutive weeks after falling more than 10% from a September record.

Apple shares are up more than 3% from a three-month low on Oct. 4. Microsoft Corp., Amazon.com Inc. and Alphabet Inc. have also rebounded with two consecutive weekly gains. Of the five biggest U.S. technology companies, only Facebook has continued to fall.

For Jurrien Timmer, director of global macro at Fidelity Investments, stocks like Apple and Alphabet are particularly attractive because they boast reasonable valuations relative to revenue growth expectations.

“I think that growth remains an under-appreciated theme,” Timmer said in an interview. “These companies produce a ton of revenue, a ton of free cash flow and they are consistent about it.”

Apple is now trading at 26 times earnings projected over the next 12 months, down from 28 in early September and below the 28 average multiple in the Nasdaq 100 Stock Index. When the Cupertino, California-based company reports results for its fiscal fourth quarter on Oct. 28, it’s projected to deliver more than $20 billion in profit, an increase of 60% from the same period a year ago.

On Monday, Apple is expected to unveil the first redesign of its MacBook Pro laptop in five years. The new laptops will be the first high-end MacBook Pros to feature Apple-designed processors in the place of Intel Corp. chips.

The fact that Apple is releasing new products signals the company’s confidence in its ability to deliver them to customers by the holiday season, according to Wedbush analyst Daniel Ives.