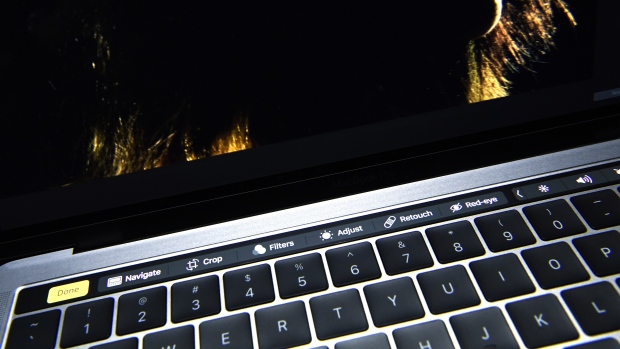 The Touch Bar is seen on a new MacBook Pro laptop computer during an event at Apple Inc. headquarters in Cupertino, California, U.S., on Thursday, Oct. 27, 2016. , David Paul Morris/Bloomberg

Apple Inc. plans to launch a trade-in program for Mac computers next week at its retail stores in the U.S and Canada, adding the devices to an effort already in effect for other products.

The Cupertino, California—based technology giant informed retail employees that the new program will begin on June 15 in the U.S. and June 18 in Canada, according to people familiar with the matter. Customers can exchange a Mac for credit toward a new computer or apply the trade-in value to an Apple gift card.

Customers have previously been able to trade in their Macs via Apple’s website. Apple already offers trade-in programs at its stores for many other products, including the iPhone, iPad and Apple Watch.

The move could help boost sales of Macs by giving customers a way to get credit toward a new model at the point of purchase. However, the full impact of the program will likely take several more weeks because about 200 of Apple’s retail stores are still closed due to COVID-19 precautions.

Mac sales generated about US$25.7 billion in fiscal 2019, or almost 10 per cent of the company’s total annual revenue.

Bloomberg News reported this past Saturday that Apple is also preparing to launch installment payment plans for the Mac, iPad, AirPods and other devices via the Apple Card in the near future.