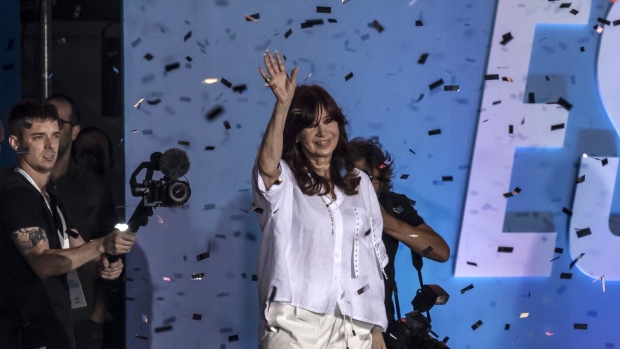 (Bloomberg) -- Argentina’s Vice President Cristina Fernandez de Kirchner faces a sentence of as much as 12 years when a federal court on Tuesday rules in an investigation for alleged corruption that risks upending the country’s already-volatile politics.

The court in Buenos Aires is expected to issue a ruling on the case in which Kirchner is both accused of graft and of allegedly leading an “illicit association” between her past governments and a construction magnate. In the event of a guilty verdict, the judges may issue a sentence for her and other defendants. Kirchner, who has repeatedly denied wrongdoing, is protected by her immunity as a senator and vice president from serving jail time.

The court will release the verdict at 5:30 p.m. local time, a court official said in a webcast statement.

The decision comes after a federal prosecutor recommended 12 years in prison and a lifetime ban on political positions for Kirchner, who was president from 2007 to 2015. She has denounced the case as a political maneuver by the opposition to oust her from power.

It’s the latest chapter of Kirchner’s political career saga, from senator in the 90’s and first lady to President Nestor Kirchner at the beginning of the century, to vice president who handpicked current head of state Alberto Fernandez. A polarizing figure, Kirchner survived a botched assassination attempt in September that stunned the nation. She also faces other corruption cases at various stages of litigation.

In a rare interview with Brazilian newspaper Folha de Sao Paulo published Monday, Kirchner reiterated that any decision by the court was politically motivated and allegedly influenced by his political rival, former president Mauricio Macri, and media outlets that are critical of her.

“Obviously there will be a conviction,” she said about the ruling.

Kirchner, 69, could appeal the decision to the supreme court, dragging the process along further. To strip Kirchner of her senatorial immunity, two-thirds of lawmakers in the upper chamber of congress would have to vote to remove it, which isn’t expected to happen.

The expected sentencing is seen as both an increase in Argentina’s political tensions and a way for the ruling coalition to galvanize positions ahead of the country’s presidential elections next year. Some allies close to Kirchner have already threatened with protests and union strikes in case the vice president is found guilty.

“Things are going to get nasty, as any outcome will likely result in deeper political polarization,” said Juan Cruz Diaz, managing director of Cefeidas Group in Buenos Aires. “This case has been highly politicized from the start from both sides, and the results will be highly contested.”

Here are other key points to watch:

--With assistance from Daniel Cancel.

(Updates with timing of verdict in the third paragraph)