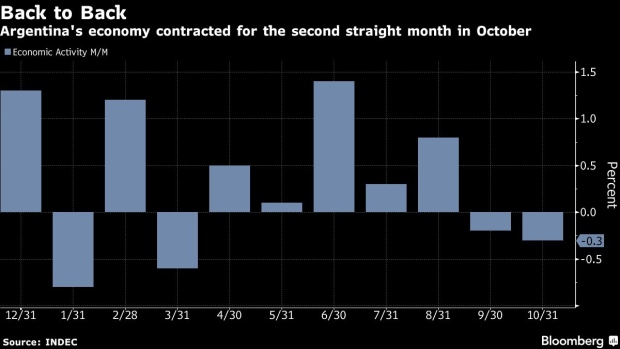 (Bloomberg) -- Argentina’s economy contracted for the second straight month in October as inflation rocketed toward 100% and unemployment rose for the first time since the pandemic.

Economic activity fell 0.3% compared to September, according to government data published Wednesday. From a year ago, the economy expanded 4.5%, though the country’s crucial agriculture sector contracted slightly on an annual basis.

Unemployment in Argentina’s formal economy also ticked up to 7.1% from 6.9% during the third quarter, the first increase since 2020, according to separate figures published Wednesday. The underemployed population rose by nearly 200,000 in the first three quarters of the year, returning near pandemic levels.

South America’s second-largest economy is expected to expand over 5% this year before growing less than 1% in 2023, according to the central bank’s latest survey of analysts. Activity could lose momentum due to uncertainty stemming from Argentina’s presidential election and a crop drought that may impact commodity exports.

Compounding matters for Argentina’s economy, the fiscal deficit widened and the tourism sector, a key source of dollars, saw more travelers depart the country than arrive.

The government reported a primary fiscal deficit of 227.8 billion pesos in November, the largest monthly shortfall in nominal terms since June.

For the year through October, nearly 600,000 more Argentine travelers left the country than foreigners who arrived, translating into a tourism deficit that puts pressure on the currency, official data showed. World Cup travel in November likely exacerbated that trend.

(Updates with more context on unemployment starting in the third paragraph, as well as tourism data in the final paragraph)