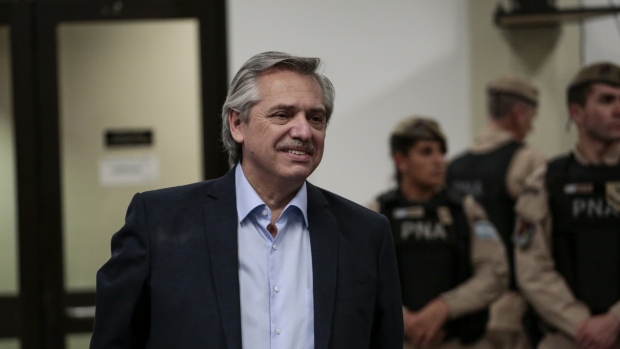 (Bloomberg) -- Argentina’s investors are keenly watching for leading candidate Alberto Fernandez’s next steps after the results of Sunday’s presidential election were tighter than expected.

Fernandez won the race for the country’s top job, with 48% of the vote, above the 45-point threshold needed to win outright. But with 91% of votes counted, the big surprise of the night was that incumbent President Mauricio Macri narrowed Fernandez’s margin of victory to seven points from a 16-point gap in an August primary.

Analysts and investors are now watching for two key items as they prepare for the market reaction come Monday morning. First, what the final composition of congress will be, and how that may impact key legislation ahead, including a debt restructuring. Second, they’ll be keeping an eye on what signals Fernandez gives in his acceptance speech Sunday evening.

“I don’t expect massive volatility -- markets will be waiting to see who Fernandez appoints to his cabinet and the economic plan he announces,” said Jimena Blanco, political research director at consulting firm Verisk Maplecroft in Buenos Aires. “If anything, this greater balance could have a positive impact for those looking to acquire Argentine assets.”

To contact the reporters on this story: Scott Squires in Buenos Aires at ssquires4@bloomberg.net;Sydney Maki in New York at smaki8@bloomberg.net

To contact the editors responsible for this story: Daniel Cancel at dcancel@bloomberg.net, Carolina Millan, Andrew Dunn