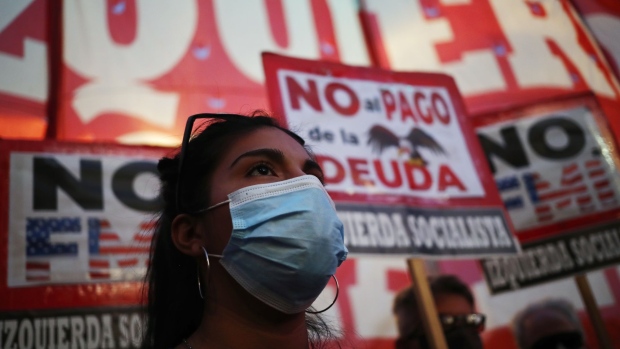 A worker arranges fruit and vegetables for sale at a store in Buenos Aires, Argentina, on Friday, Nov. 18, 2022. Argentina's annual inflation surged last month as the government implements price freezes on over a thousand consumer goods in attempt to cool cost-of-living increases. Photographer: Erica Canepa/Bloomberg , Bloomberg

(Bloomberg) -- Argentina reached an agreement with staff from the International Monetary Fund on the third review of its $44 billion program even as the Washington lender warned against temporary currency policies.

The review now goes to the IMF’s executive board for approval, which is expected to meet this month, according to a statement from the IMF published late Friday. Upon completion of the review, Argentina will have access to about $6 billion, the IMF said.

The funds will help shore up the central bank’s net cash reserves and refinance payments stemming from a previous program.

The IMF said that prudent macroeconomic management and efforts to mobilize external financing are supporting macroeconomic stability in the country.

“Actions by the new economic team are starting to bear fruit, inflation is moderating (albeit from high levels), and the trade balance is improving, largely on account of a healthy slowdown in domestic demand and imports,” the IMF said.

“Continued decisive policy implementation remains essential to further reduce macroeconomic imbalances, especially in the context of a more challenging external and domestic backdrop,” the IMF added. Key program objectives, including those related to the primary fiscal deficit and net international reserves, would remain unchanged during 2022 and 2023.

Argentina may need another waiver in this review after bringing back a temporary currency measure in late November that aims to boost soy exports and shore up the central bank’s dollar stockpile but ran against IMF program conditions. Officials invented a new exchange rate just for soy farmers that goes until the end of December but risks violating the IMF’s “multiple currency practices” rule.

The IMF said in the statement that while “temporary administrative FX measure have been adopted as imbalances are being addressed”, they should be minimized since they’re not a substitute for solid macroeconomic policy.

Signed last March, the program has already faced a whirlwind of changes. Argentina is on its third economy minister this year, while two key IMF negotiators have stepped away from their roles for other positions. The key target on cash reserves has changed twice, while the government needed two waivers to pass the previous review for violating IMF program rules.

With board approval pending, Argentina stands to benefit in this review from an IMF technicality that made the government only need to meet one target on its primary fiscal deficit instead of three targets like a normal review. The other two targets -- for net cash reserves and monetary financing -- were already used as part of the previous review due to the date of the IMF board vote.

“While progress has been made, macroeconomic conditions remain fragile and steadfast program implementation will be essential going forward,” the IMF said, highlighting the need to continue fiscal consolidation seeking a reduction of the primary fiscal deficit from 2.5% of GDP in 2022 to 1.9% of GDP in 2023.