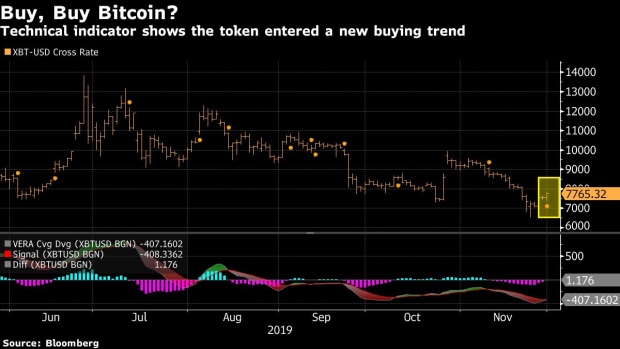 (Bloomberg) -- Bitcoin bulls have at least one technical indicator to be thankful for.

Based on the GTI Vera Convergence Divergence Indicator, which measures up and down shifts, Bitcoin entered a new buying trend, potentially signaling that it’s primed to retake the upper end of its trading range around $8,000. That’s a welcome sign for bulls who saw Bitcoin’s price drop more than 15% in November.

November’s been volatile for cryptocurrencies, which traded lower for much of the month after China took steps to crack down on digital asset trading. The latest clampdown has already claimed its first casualties: at least five local exchanges have halted operations or announced they’d stop serving domestic users this month, Bloomberg News reported.

“It appears we have seen some profit taking on short positions, which has lifted prices,” said Craig Erlam, senior market analyst at Oanda. But, “there’s obviously been a lot of bearish sentiment recently and there’s nothing in the bounce that suggests a shift to me.”