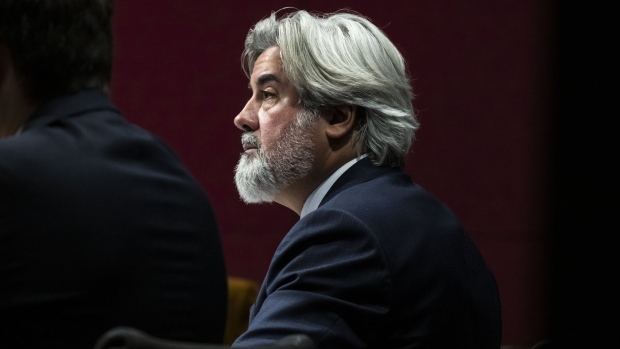 Minister of Canadian Heritage Pablo Rodriguez prepares to appear before the Senate Committee, in the Senate of Canada Building in Ottawa, on Tuesday, Nov. 22, 2022. (THE CANADIAN PRESS/Justin Tang)

The House of Commons passed a Liberal bill on Wednesday designed to require web giants to compensate journalism outfits for reposting their content, and Meta is once again threatening to remove news content from Facebook in Canada.

Federal Heritage Minister Pablo Rodriguez has argued the bill will "enhance fairness" in the digital news marketplace by creating a framework and bargaining process for behemoths such as Google and Meta, which owns social media sites Facebook and Instagram, to pay media outlets.

"On the surface, the bill we are debating now is simply about ensuring fair compensation for Canadian media, but the issue is actually much bigger than that," he said during a final speech on Tuesday.

The bill would create a system overseen by the Canadian Radio-television and Telecommunications Commission, which would have the power to impose administrative monetary penalties on companies that are not compliant with its provisions.

Companies could be exempt from the negotiation process set out in the proposed legislation, known as Bill C-18, if they already have agreements with media outlets that fulfil certain criteria.

Last week, the heritage committee sent the bill back to the House with 18 amendments to add clarity on Indigenous news, eligibility requirements, clearer timelines for the negotiation process and transparency.

As NDP heritage critic Peter Julian pointed out during a speech on Tuesday, 16 of those amendments came from his party during a weeks-long clause-by-clause process.

Several of the amendments explicitly created protections for Indigenous-led news outlets into the bill, including one that requires tech companies to have agreements in place with "a significant portion of Indigenous news outlets."

The same section was changed to make sure that the companies have agreements with a "range of news outlets in both the non-profit and for-profit sectors," and that reflect "all markets and diverse populations, including local and regional markets in every province and territory, anglophone and francophone communities, including official language minority communities, and Black and other racialized communities."

And it was also updated to allow for public consultations on any such exemptions.

With Conservatives taking issue with the fact that CBC online content would fall under the bill's provisions, another amendment stipulated that the national broadcaster would be required to publicly report any agreements it has with the tech giants.

Google and Meta have roundly criticized the bill.

In a statement on Wednesday afternoon, Meta once again threatened to "consider removing news from Facebook in Canada rather than being compelled to submit to government-mandated negotiations that do not properly account for the value we provide publishers."

Google had previously warned that a provision requiring it to show no "undue" preference to certain outlets could lead to poorer-quality information being presented in search results. It also raised the prospect of misinformation becoming more visible for the same reason.

A Bloc Québécois amendment raised during the committee process sought to assuage concerns that outlets that are not committed to journalistic principles could still benefit from the bill.

It included to the bill's definition of "eligible news business" a requirement for the outlet to be a member of a recognized journalism association and to follow its code of ethics or have its own code that requires "adherence to the recognized processes and principles of the journalism profession, including fairness, independence and rigour in reporting news and handling sources."

Such a code would need to include measures to make sure that news content produced by the outlet does not promote "hatred or misinformation against any identifiable group" and that any errors of fact are promptly and transparently corrected.

Another amendment ensured that any companies that are headquartered outside of Canada would not be captured under the bill.

And the legislation was also updated to broaden the definition of eligible businesses so that owner-operators could be included as one of the two journalists the business employs.

It did not, however, remove a requirement for the two journalists to be employed, despite concerns that would exclude many small businesses. Rodriguez said that the government has other measures for supporting the news business. "As I have said many times, this bill is not a panacea."

Conservatives have argued that the bill would give regulators too much leeway to make decisions about what is and isn't real journalism.

"We want to keep the internet free and we do not want the government choosing what needs to be done there," Conservative MP Marilyn Gladu said on Tuesday.

"To do that, the best thing to do is get rid of Bill C-18 and allow the tech giants to fund something that small media outlets could themselves divide."

The Liberals and NDP have argued that such suggestions make the Tories seem like they are speaking for companies such as Meta.

Another Conservative MP, Brad Redekopp, had given a speech praising Elon Musk's recent purchase of Twitter as having breathed "fresh air" into the tech industry.

Redekopp also said that the people who work at Google are those who care about freedom of speech on the internet: "They may run worldwide organizations, but the Silicon Valley boys are still hackers at heart, living out of their mothers' basements playing Halo, sharing on Twitch and posting on Reddit."

In response, Liberal MP Kevin Lamoureux emphasized that such companies bring in billions of dollars of revenue every year while media companies have struggled to keep up.

"The creators and news agencies are reporting on the news and their content is being utilized by these giants, which are not paying anything for it."

The vote ultimately passed 213 votes to 114 on Wednesday, with Conservatives the only ones to vote against it. It goes to the Senate for consideration next.

This report by The Canadian Press was first published Dec. 14, 2022.

Meta funds a fellowship that supports journalism positions at The Canadian Press.