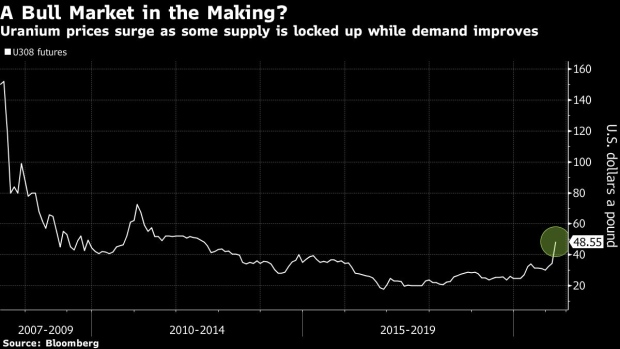 (Bloomberg) -- The Canadian firm behind the world’s only physical uranium fund said hedge funds and family offices are driving up demand for the radioactive metal used to fuel nuclear reactors.

The Sprott Physical Uranium Trust has itself been on a buying spree, bolstering its stockpile by 45% in four weeks after snapping up 8.1 million pounds of the commodity as prices surged. Uranium has soared 40% this month, putting pressure on utility owners and other users when supplies are dwindling and demand is poised to take off with more reactors being built around the world.

“I don’t think we’re crowding them out,” said John Ciampaglia, chief executive officer of Sprott Asset Management, which oversees the trust. “You’ve got end users that are trying to buy materials, you’ve got speculators and financial intermediaries in the market as well.”

Investment demand from non-utility buyers such as hedge funds and family offices has been strong this year, even before Sprott Inc.’s asset-management unit launched the trust on July 19, according to Ciampaglia. A few uranium development companies bought the physical commodity after raising equity in the capital markets rather than parking the proceeds into cash, he said.

Still, Sprott’s trust holds about 26 million pounds of uranium, equal to about 14% of the annual consumption from the world’s nuclear reactors. The closed-end fund was formed out of an April takeover of Uranium Participation Corp., which held 18 million pounds of uranium, and its trust units trade on the Toronto Stock Exchange. The units have jumped 41% this month, tracking uranium’s surge. The fund invests and holds substantially all of its assets in uranium, which is stored in highly secured facilities in Canada, France and the U.S.

Historically low prices and pandemic-driven mine disruptions have prompted uranium producers including Cameco Corp. to buy from the spot market to fulfill their long-term contracts with consumers. That means stockpiling by the Sprott fund may have the potential for tightening the market and boosting prices.

The robust investment demand is built on a growing realization that nuclear power is becoming more accepted by policymakers worldwide as a way to limit greenhouse-gas emissions, Ciampaglia said.

“That’s something that’s just recent, and you’re seeing this from the Biden administration acknowledging and providing support for nuclear,” he said. “And the European Union clearly identifies nuclear as part of the taxonomy.”

Uranium is also getting a boost from generalist investors who are seeking investments that meet environmental, social and governance criteria or support the energy shift away from fossil fuels, he said.

Then there’s the recent buzz from retail investors, with uranium becoming a recent target of the meme-stock frenzy that share tips on Reddit message boards. Cameco, the world’s second-largest uranium miner, was the most searched stock symbol on Monday, according to WallStreetBets Ticker Sentiment.

Reddit day-traders “seem to be into it,” Bloomberg Intelligence analyst Eric Balchunas said. “When you have something that’s starting to surge that’s been beaten for 10 years and there’s some more room to run potentially, I think that’s what they’re trying to do.”