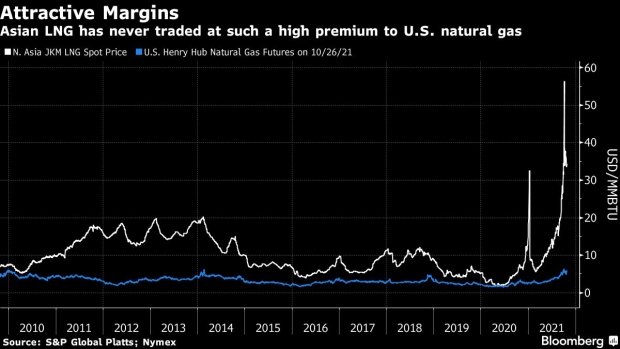 The Cheniere Energy Inc. liquefied natural gas (LNG) export terminal stands under construction in Corpus Christi, Texas, U.S., on Wednesday, Oct. 3, 2018. On Wednesday, Cheniere Energy said it started producing liquefied natural gas for the first time at the Corpus Christi plant. It plans to fill up the tank with 43 million gallons of super-chilled LNG that's slated to be shipped to gas-hungry countries like China -- a rosy prospect unless trade tensions escalate between the world's two biggest economies. , Bloomberg

(Bloomberg) -- Asian liquefied natural gas traders are rushing to secure shipments from the U.S., where the fuel is among the cheapest in the world despite what’s turning into the steepest price run in two decades.

Firms in China and Japan, the two biggest importers, are seeking to procure LNG specifically from the U.S., and are in discussions with exporters and portfolio players to lock in deliveries through March, according to traders with knowledge of the matter. The companies want LNG linked to the Henry Hub index, the U.S. benchmark that’s trading at a fraction of prices in Asia and Europe.

A global energy squeeze has sent prices for gas and coal surging from Australia to the Netherlands. Utilities are busy stocking up on fuel before winter descends on the Northern Hemisphere and heating demand soars.

While U.S. gas prices have more than doubled this year, they still are much cheaper than overseas markets in large part because of the bounty of North American shale fields.

U.S. LNG sent to Asia this winter can turn an attractive profit, with the netback at roughly $25 to $26 per million British thermal units, according to analysis from BloombergNEF. That’s near the highest ever. It is also in stark contrast to last year’s summer, when U.S. LNG shipments to Asia and Europe weren’t profitable as the Covid-19 pandemic dashed demand for the fuel.

Margins are so good that a single cargo from the U.S. is exchanging hands as many as eight times, as firms are eager to resell the same shipment and get a slice of the profit, according to traders.

The Asian LNG buyers are eager to buy U.S. gas on a loading basis from Gulf Coast terminals, then charter the shipping themselves, according to the traders. That’s resulted in higher charter rates in both the Atlantic and Pacific, and has also stoked fears about Panama Canal congestion when winter shipments peak.