Stocks climbed as a slew of solid corporate profits took the focus off concerns about the economic impact of coronavirus flareups around the globe. The dollar fell, while Bitcoin surged.

After a bruising selloff driven by worries over a peak in earnings and a slowdown in growth momentum, the S&P 500 notched its biggest back-to-back rally in two months. Once again, the advance was led by companies that stand to benefit the most from a reopening of the economy, such as commodity, financial and industrial shares. A gauge of small caps gained almost 2 per cent.

Bitcoin soared -- trading near US$32,000 -- after some prominent voices discussed prospects for the digital currency at the “B Word” conference, hosted by the Crypto Council for Innovation. Elon Musk, the billionaire head of Tesla Inc., said his space exploration company SpaceX owns the digital token. Ark Investment Management’s Cathie Wood urged firms to consider the “explosive” Bitcoin growth. 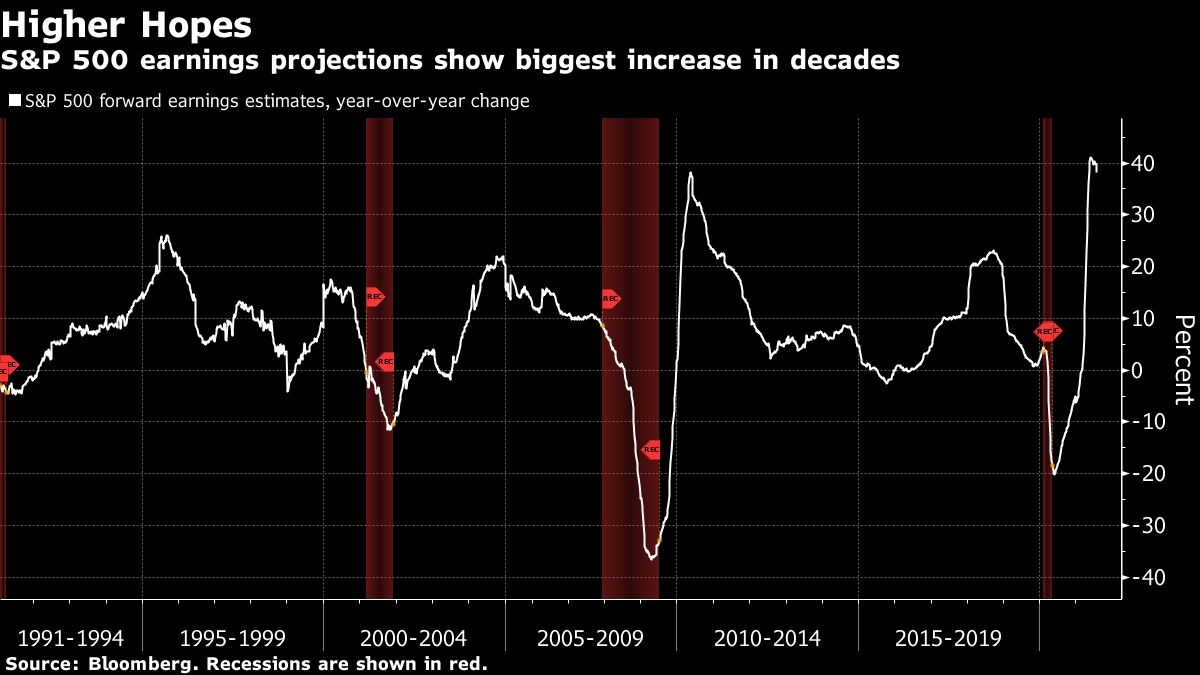 Traders are rewarding companies with better-than-expected results amid bets that the second quarter’s expected 70 per cent earnings growth will mark the pinnacle of this expansion cycle. More than 85 per cent of the S&P 500 firms reporting results so far have beaten analysts predictions, according to data compiled by Bloomberg. For Michael Purves, chief executive officer at Tallbacken Capital Advisors, earnings forecasts for the benchmark have surged because of a “huge explosion” in profits at economically sensitive firms.

“We may be getting back to a point where earnings matter a little bit more than they had,” said Matt Forester, chief investment officer of BNY Mellon’s Lockwood Advisors. “Company guidance is going to be very important as well.”

Strategists from JPMorgan Chase & Co. and UBS Global Wealth Management urged clients to buy cyclicals as the economic recovery is just getting started.

The “reopening of the economy is not an event but rather a process, which in our opinion is still not priced-in, and especially not now given recent market moves,” wrote JPMorgan strategists led by Dubravko Lakos-Bujas. “This does not signal the beginning of a down cycle.”