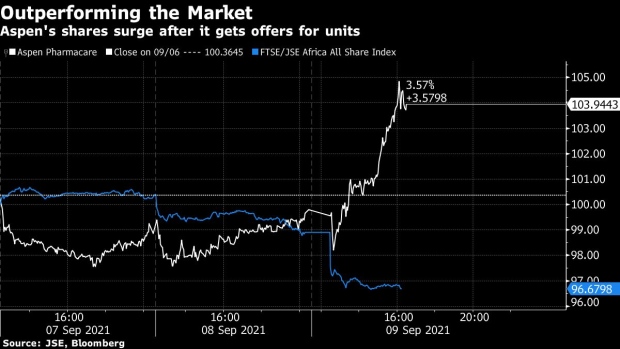 An employee walks down a corridor near pharmaceutical displays at the Aspen Pharmacare Holdings Ltd. offices in Durban, South Africa, on Friday, June 30, 2017. Aspen lost its appeal against a ruling by Italy’s antitrust authority and will have to pay a 5.2 million euro ($5.9 million) fine and interest for raising prices on cancer drugs by as much as 1,500 percent. Photographer: Waldo Swiegers/Bloomberg , Bloomberg

(Bloomberg) -- Aspen Pharmacare Holdings Ltd. has received two unsolicited offers for its active pharmaceutical ingredient business and will start a process aimed at evaluating proposals for the unit.

The approaches are for operations almost exclusively in Europe and make both chemicals and the anticoagulant drug heparin, Chief Executive Officer Stephen Saad said by phone Thursday. The company has has already sold most of its other heparin interests, part of a recent slimming down effort to reduce debt.

“We had unsolicited offers that given their materiality we have to consider,” Saad said. Africa’s largest drugmaker has started “a structured process” to facilitate any proposal for the division, according to an earlier statement.

The disposal of an infant-formula business to Lactalis International and a Japanese unit to Novartis AG in 2019 helped the drugmaker reduce borrowings, as did the agreed sale of its European thrombosis division to U.S. drugmaker Mylan NV in 2020.

Aspen has switched focus to producing so-called steriles such as anesthetics rather than lower-value generic medicines, paving the way for a push into vaccines. The group has a contract to fill and package Johnson & Johnson’s Covid-19 dose in South Africa, and is in talks with the U.S. company about gaining a license.

The Durban, South Africa-based company may still consider building a plant to make the ingredients needed for that vaccine, but it would be near its manufacturing site in the country, Saad said.