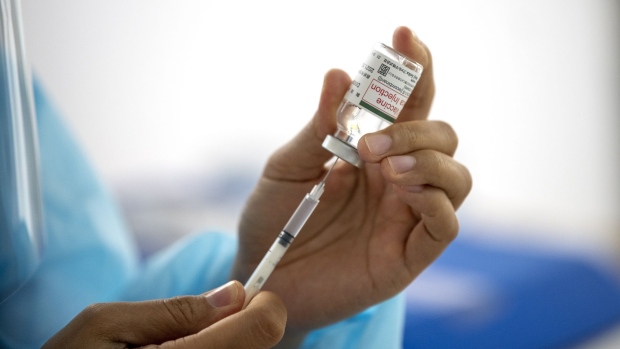 A healthcare worker prepares a dose of the AstraZeneca Plc Covid-19 vaccine, donated by Japan, for an FPT Software Co. employee at the company's facility in the Saigon Hi-Tech Park in Ho Chi Minh City, Vietnam, on Monday, June 21, 2021. Vietnam's health ministry said the country will have nearly 125 million doses of Covid-19 vaccines this year, according to the government's website. Photographer: Maika Elan/Bloomberg , Bloomberg

(Bloomberg) -- AstraZeneca Plc is dropping plans to test its Covid-19 vaccine as a booster in the U.S., according to a letter sent to participants in the clinical trial that urged volunteers to seek a third dose elsewhere.

After discussions with the U.S. government, it became clear that the U.K. drugmaker was unlikely to pursue plans to assess a third dose of its vaccine, New York’s Montefiore Medical Center told trial participants on Tuesday.

Astra, one of the first vaccine developers out of the gate, has yet to win clearance to sell the shot in the U.S. after facing questions about its clinical trial results and side effects. As a result, the product has taken a back seat to messenger RNA rivals made by Moderna Inc. as well as Pfizer Inc. and its German partner, BioNTech SE.

Barry Zingman, the doctor overseeing the trial at Montefiore, advised participants in Astra’s vaccine trial who haven’t gotten a third shot to seek one outside the study, mentioning immunizations from Pfizer, Moderna and Johnson & Johnson. Volunteers who take one of these shots can still remain in the study, he said.

The performance of Astra’s vaccine, which was developed with the University of Oxford, as a booster will become clearer in coming days when the U.K. releases a study comparing the performance of seven different Covid shots administered as a third dose.