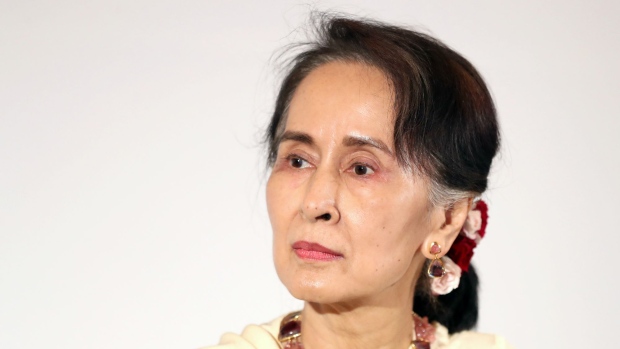 Aung San Suu Kyi, Myanmar state counselor, pauses while speaking during the Singapore Lecture in Singapore, on Tuesday, Aug. 21, 2018. Myanmar is working with Bangladesh to resettle refugees back in the country but "the danger of terrorist activity" that fanned tensions in the restive Rakhine state remains "real", Suu Kyi said at the 43rd Singapore Lecture. Photographer: Paul Miller/Bloomberg , Bloomberg

(Bloomberg) -- Myanmar’s civilian leader Aung San Suu Kyi has been shifted to solitary confinement inside a military-built prison compound in the capital of Naypyidaw, a junta spokesman said Thursday.

Suu Kyi was detained at an undisclosed location soon after the coup last year, and a special court in April sentenced her to five years in prison in the first of several corruption charges leveled against her. The sentencing brought the total prison term to 11 years and effectively prevents the ousted leader from staging a political comeback in the Southeast Asian country.

She “has been moved to the prison in accordance with criminal laws, given that the court has ruled she’s convicted,” Major General Zaw Min Tun, lead spokesman for the State Administration Council, told reporters in a short statement.

Suu Kyi is on trial for more than a dozen other charges including violating the colonial-era official secrets act. In total, the maximum prison sentence for these remaining charges is nearly 190 years.