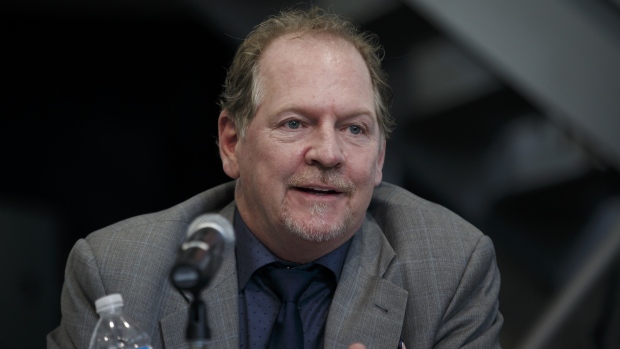 There are a few things that still keep Terry Booth up at night.

Aside from the Aurora Cannabis Inc. chief executive officer’s seven-month-old daughter, who he dutifully dotes on, Booth can’t help but shake his company’s stock performance as of late.

“As the CEO, you really want to know how the market is differentiating us,” Booth said in a rare, wide-ranging interview with BNN Bloomberg. “I am less worried about [cannabis] demand, obviously.”

While Aurora’s stock has indeed suffered, trading down 51 per cent so far this year, Booth continues to remain optimistic about the company’s prospects. He highlights how the U.S. remains a crucial market for Aurora's CBD product ambitions, while reiterating a firm focus on governance and managing its finances to retain investor confidence in an industry beset by steep losses.

Booth said there could be “carnage” in Canada’s cannabis industry over the next year if some producers remain unable to reduce their cost of producing cannabis amidst what has become an oversupplied market.

Canopy Growth Corp. and Tilray Inc. are two leading cannabis producers, which, according to Raymond James analysts, have high production costs per gram, while Aurora has turned itself into a low-cost player, joining Organigram Holdings Inc. and Village Farms International Inc.

“I think you'll see some carnage in the production area when people are growing it for $4 and $5 a gram, [when] we're doing it for less than a buck,” Booth said. “We're not going to want to get into any price wars but if the market does go down in pricing because of oversupply, we're best prepared to deal with it.”

Booth said the company’s US$400 million at-the-market equity financing program it secured earlier this month will give the pot giant some agility to handle its operations during the current downturn, which is something that most of the market may not be able to stomach in the coming months.

“[Banks] threw money around like it was spaghetti,” he said. “These companies that never stopped thinking money was going to be available to them [forever] are going to be in a world of hurt.”

Meanwhile, Booth has put his money where his mouth is, snapping up 270,000 Aurora shares earlier this week for nearly $1 million, a move he said is aimed at showing investors he remains confident in the company’s business, despite what the market thinks of it.

“It’s going to wash itself out and common sense normally prevails. The timing of that common sense is imperative for us to properly adjust our business operations and put our big boy and big girl pants on to make sure that we run it like a business – and that's what Aurora intends to do.”

That doesn’t mean that Aurora, possibly the biggest buyer in the sector after its $2.5-billion deal for MedReleaf, is looking to end plans to acquire more companies. Market conditions may result in a bevy of opportunities on both sides of the border for Aurora to take advantage of, but Booth isn’t interested in paying for companies that need a lot of money to be built up anymore. Instead, he’s eyeing deals that would be a good fit for the Edmonton-based firm both culturally and operationally.

“The deals that we'll do in the near future would be ones that, first off, we’d want to be accretive, or soon-to-be accretive, and have great stories about them. We don't want to buy a bag of bones, any distressed assets that we've got to throw a lot of capex at,” Booth said.

Earlier this month, Aurora decided to cease construction on its Nordic 2 facility in Denmark, a move that is aimed at saving the company $80 million over the next 12 months. Booth acknowledged that demand in the European market may have been “overestimated,” resulting in the pullback, noting that it “will take some time” for the continent’s medical community to become better educated about prescribing cannabis to their patients.

He said it’s a “bit of a mixed bag” why the company has had its U.S. plans delayed for so long after spending a significant amount of time understanding that market.  As a company that lists on the Toronto Stock Exchange, it’s forbidden from doing business with any company that sells recreational cannabis. However, Booth noted “there’s plans for that” in place. As for CBD, Booth said Aurora came close to announcing some deals which ultimately were cancelled by its bankers but added its “imperative” to get a first-mover advantage in that market.

While Booth declined to speak directly about the discussions Aurora held with The Coca-Cola Co. as first reported by BNN Bloomberg, he did note that major tobacco and beverage players continue to watch the cannabis market unfold from the sidelines. They'll get into the industry one day, just not right now, he added.

“They’re waiting in the wings,” Booth said. “There'll be other companies that do big deals, you know, Big Pharma, Big Tobacco, Big Alcohol, Big Cosmetics. They're all waiting, in my mind, from a global perspective.

“And I think Canada is seen as a sandbox for those companies, and that's why we're drawing their attention.”