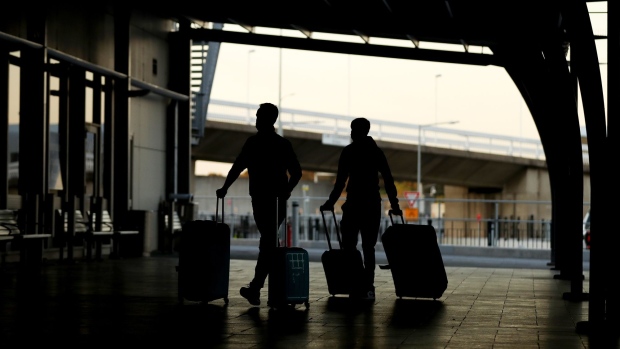 Travelers walk with their luggage outside the arrival hall at the international terminal of Sydney Airport in Sydney, Australia. Photographer: Brendon Thorne/Bloomberg , Bloomberg

(Bloomberg) -- Australia delayed the planned reopening of its borders to students and foreign workers as officials weigh the threat posed from the omicron variant of the coronavirus.

The government last week said that fully-vaccinated eligible visa holders would be able to enter Australia from Dec. 1 without applying for a travel exemption. It announced late Monday that those travelers, which also include refugee visa holders and working holiday makers, would now have to wait a further two weeks to enter the country.

“The temporary pause will ensure Australia can gather the information we need to better understand the omicron variant, including the efficacy of the vaccine, the range of illness, including if it may generate more mild symptoms, and the level of transmission,” the statement said.

The delay is a blow to Australia’s attempts to reopen to the world after the pandemic locked down its biggest cities and likely sent its economy into its second-largest contraction on record. The government said last week that it expected about 200,000 of the eligible visa holders to start returning from Wednesday. The border is still closed to all other entrants except fully-vaccinated Australians and travelers from New Zealand and Singapore.

The National Cabinet, comprised of Prime Minister Scott Morrison and the eight state and territory leaders, are set to meet on Tuesday to discuss Australia’s response to the new variant. There have been several confirmed cases in the country.

Health Minister Greg Hunt said on Monday that Australia was better prepared than most other countries to face omicron thanks to the recent success of its vaccination program. Morrison also sought to quell Australians’ concerns, saying that 86.7% of residents over the age of 16 were fully vaccinated and that those who weren’t should do so.