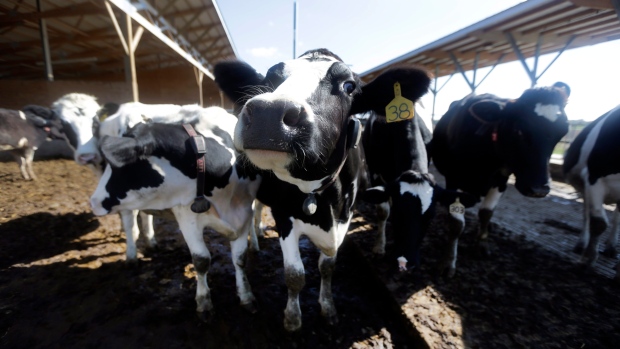 Australia and New Zealand dairy industry leaders said on Wednesday they would support moves by the United States to draw the World Trade Organization into a trade dispute with Canada, after President Donald Trump said existing rules were unfair.

On a visit to the U.S. cheese-making state of Wisconsin on Tuesday, Trump said he would "stand up for our dairy farmers" adding that "in Canada some very unfair things have happened to our dairy farmers and others".

The dairy industry in the European Union, which has two-thirds of Canada's 20,412 tonne cheese import allocation, signed a letter last September along with Australian, New Zealand, U.S. and Mexican peers, demanding the start of a WTO dispute.

"We are usually not as aggressive about it as the Americans because, well they are next door and they have some more concrete issues with Canada than we do," said Jukka Likitalo, secretary general of EU dairy trade association Eucolait.

"But it's certainly one of the most protectionist countries in the world for dairy," he added.

Canada's dairy farmers and processors, including Saputo Inc (SAP.TO) and Parmalat Canada, struck an agreement in 2016 that industry groups elsewhere say would price domestic milk ingredients for cheese-making below cost, under-cutting their exports.

Canada denies that its dairy policies cause losses for U.S. dairy farmers.

Trump did not specify what parts of Canada's tariff-protected dairy sector he wanted to change, nor what measures he would take to make it happen, but his remarks re-ignited calls for a complaint to the World Trade Organization.

The United States is the world's biggest cheese exporter outside Europe.

"I don't expect there would be many countries that would do anything other than support a WTO action against Canada," said Australian Dairy Farmers interim Chief Executive Officer John McQueen in a telephone call.

New Zealand Trade Minister Todd McClay told Reuters in an email his government was assessing the "WTO-consistency" of Canada's dairy industry policy, and had raised concern with the Canadian government.

"Together with other dairy exporting countries, including the U.S., we have questioned these policies at WTO Committee on Agriculture meetings in Geneva as recently as last month," McClay said.

Malcolm Bailey, chairman of the Dairy Companies Association of New Zealand, said his organization was working with his foreign ministry to gather information for a possible WTO complaint.

New Zealand, the second biggest non-Europe cheese exporter, is "quite clearly building a coalition of those prepared to make the case to the WTO", said Bailey.

"You've got the Americans, the Australians, the Mexicans who are concerned about this."

The European Commission declined to comment on the issue. The EU is also on the verge of implementing a free trade deal that would more than double its cheese exports to Canada.

David MacNaughton, Canada’s ambassador to the United States, hit back against the criticism at a news conference in Halifax, Nova Scotia, on Wednesday.

"Particularly when we’re criticized about some of our policies, one needs to look at the degree to which the U.S. and other countries both subsidize their agricultural industry and put up non-tariff barriers...," he said.

"It’s easy to criticize each other. We have actually allowed more imports of dairy products into our country as a percentage (of GDP) than they have in theirs," he added.

The Dairy Farmers of Canada said on Tuesday it was confident Ottawa would "continue to protect and defend" the dairy industry.