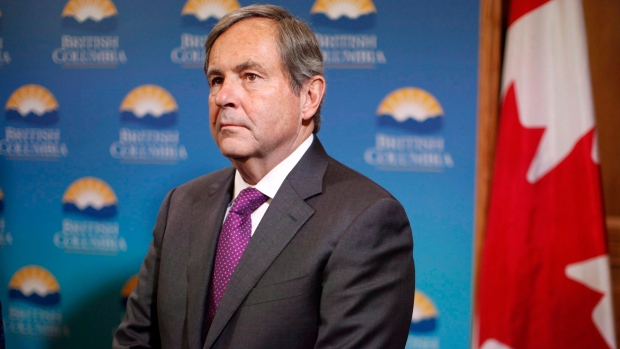 Canada's Ambassador to the United States David MacNaughton looks on during a press conference following a special cabinet meeting to discuss the softwood lumber dispute during meetings at Legislature on Thursday, February 16, 2017 in Victoria, B.C. , THE CANADIAN PRESS/Chad Hipolito

“When there’s $2 billion worth of trade going both ways every single day … and nine million jobs in the U.S. that depend on trade with Canada, you know, I think it’s going to work out just fine.”

MacNaughton’s measured tone came one day after he shot back at criticism by U.S. President Donald Trump and U.S. milk producers, saying the facts don't support a charge that the Canadian dairy industry is to blame for the woes of some American farmers.

"Canada does not accept the contention that Canada's dairy policies are the cause of financial loss for dairy farmers in the United States," Ambassador David MacNaughton said in a letter to the governors of Wisconsin and New York that was released Tuesday night in rebuttal to Trump's surprise criticism of Canada earlier in the day.

"The facts do not bear this out." 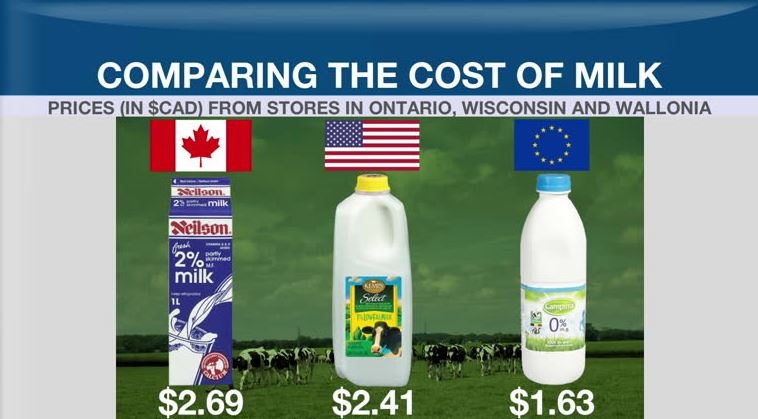 The U.S. president's surprise decision to call out Canada by name Tuesday put dairy farmers north of the border on notice that they are in America's fair-trade sights.
Trump launched his broadside after a brewing trade spat that has seen the U.S. dairy lobby accuse Canada of "systemic disregard" of its trade obligations, while the Canadian industry accused its American rival of "scapegoating."

Trump also signalled he wants to do more than simply tweak the North American Free Trade Agreement, saying he is looking for "very big changes" to the trilateral pact that includes Mexico, or else he will scrap it once and for all.

Trump levelled the threats -- some of his strongest-ever anti-Canadian rhetoric -- during an event at a Wisconsin factory where he unveiled his "Buy American-Hire American" executive order.

After what has been a relatively warm beginning in relations with Canada, which included what was seen by many as a positive trip to Washington by Prime Minister Justin Trudeau, Trump dropped the gloves on Canada's well-guarded dairy sector.

He appeared to be taking dead aim at the industry, its coveted supply-management system long a sacred political cow in Canada, during an appearance in Wisconsin, a state he took from the Democrats with his "America First" anti-trade message.

It is also a state that is feeling the effects of Canada's decision to impose import taxes on ultra-filtered milk, a protein liquid concentrate used to make cheese. It had been duty-free but Canada changed course after its milk producers complained.

A spokeswoman for Canada's dairy industry said Tuesday night there has not been any new taxes on dairy imports. 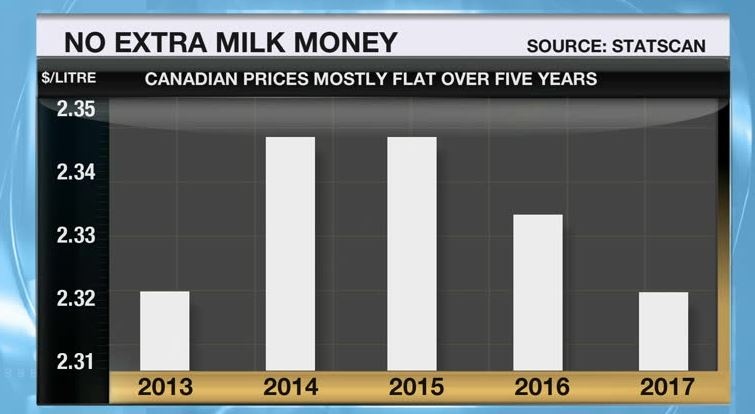 "Time and again Canada has demonstrated its disregard of its dairy commitments to the United States -- hampering America's exports to Canada -- while pursuing ways to use its government-controlled system to unfairly dump greater Canadian exports in global markets."

The Dairy Farmers of Canada, which has previously denounced the complaints as "falsehoods and half-truths," said Tuesday it was confident the federal government would continue to defend the dairy industry.

MacNaughton backed the organization's position that Canada has done nothing to block U.S. imports, and that the predicament is the result of an "over-saturated" market that has led to lower prices.

MacNaughton attached a report from the U.S. Department of Agriculture that he said "indicates that poor results in the U.S. sector are due to U.S. and global overproduction. As made clear in the report, Canada is not a contributor to the overproduction problem."

He said the trade balance on dairy "massively" favours the U.S. by a five-to-one margin.

MacNaughton called Canada-U.S. relations a "model" for the world, "but it is important that we work together to grow middle-class jobs and not lay blame where is does not belong."

Trump, however, blamed Canada for "some very unfair things have happened to our dairy farmers and others and we're going to start working on that."

Standing up for dairy farmers in Wisconsin "demands fair trade with all of our trading partners," Trump said, "and that includes Canada."

The work would start immediately, he added.

"When it comes to wasteful destructive job killing regulations, we are going to use a tool you know very well -- it's called the sledgehammer," he said.

Trump also criticized the U.S. trading regime, which calls for a waiting period, and consultations that can stretch to three months or beyond. He suggested it has stalled his attempt to renegotiate NAFTA.

Francois Dumontier, a spokesman for Les Producteurs de lait du Quebec, said imports of U.S. milk products have increased since 1993 and now account for three-quarters of milk products in Canada "so the Americans are not suffering from the current terms of NAFTA and existing trade agreements."