Over the course of the next 12 months energy will be the best performing sector: Art Hogan

Name all the economic rationales you want for the rebound, there’s something to be said for just having a high threshold for pain.

That may be the simplest explanation for the recent path of US stocks, which just strung together the longest streak of weekly gains in almost a year, despite evidence a recession is at hand as the Federal Reserve battles inflation. The economy cools, war flares and officials vow further hikes -- and investors somehow look past it, pushing tech stocks tracked by the Nasdaq 100 into a bull market on Wednesday.

While damage done in the first half obviously helped, curbing valuation excesses, several less-visible factors may be playing a role in keeping the calm. A note from JPMorgan Chase & Co. researchers this week pointed to supply-demand benefits created by buybacks and the dearth of new equity offerings, while others cite the hard-to-perturb presence of buy-and-hold investors in the expanding chunk of the market owned by passive funds.

“It’s the combination of share repurchases and the stability of passive capital that is acting as an anti-gravity force,” Lawrence Creatura, a fund manager at PRSPCTV Capital LLC, said in an interview. “They’ve been buying, and it’s on autopilot. That’s definitely a source of stability.” 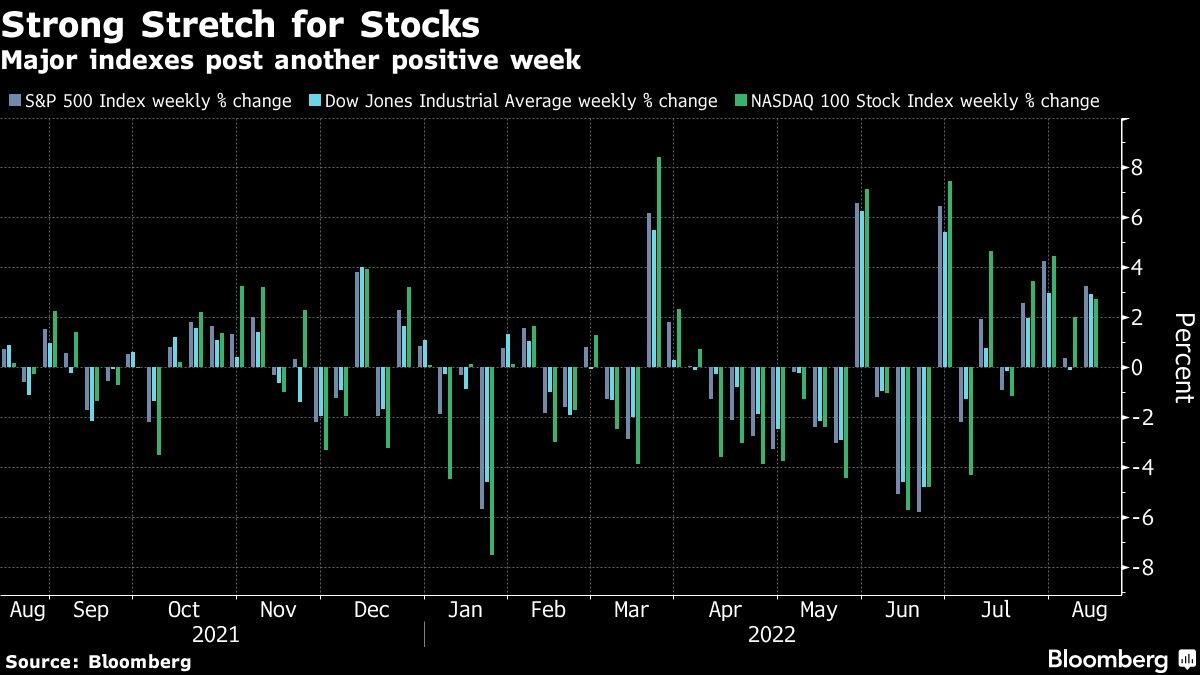 About US$6 trillion has been restored to equity values so far. Could it all reverse? Yes. Big voices on Wall Street have spent the past month telling clients that the gain since mid-June is just another bear-market mirage -- that this time won’t be different for anyone holding stocks into a recession. For all the assurance, those warnings make relatively little mention of investors’ formidable capacity to live with pain over the last few years. That includes a stretch in which the S&P 500 surged almost 70 per cent as a global pandemic and recession were putting 10 million Americans out of work.

Today, recession warnings are a dime a dozen, inflation remains very high, jobless claims are inching up and manufacturing readings have been softening. Overseas, Russia’s war with Ukraine is snarling supply chains and boosting commodities prices, while a slowdown in China is sowing worry about the future of global growth.

And yet the market stays resilient. The S&P 500 added 3.3 per cent for its fourth straight weekly advance. The Nasdaq 100 extended its gains from the June trough past 20 per cent, a threshold viewed by some as a sign that the bear market is over.

One force at work is corporations themselves. While paring back share offerings, firms and their management stepped up purchases of their own stock through buybacks and leveraged buyouts during the first-half selloff. The result has been that equities were drained from public markets at a record pace, to the tune of US$600 billion per quarter, according to data compiled by JPMorgan.

Nothing guarantees such demand will stay robust. JPMorgan strategists including Nikolaos Panigirtzoglou cautioned that business behavior could change if recession dynamics kick in during the second half. For now, though, corporate support has had a hand in preventing equity losses from snowballing.

“Such strong net equity withdrawal implies that corporates cushioned this year’s equity market correction by offsetting some of equity investors’ selling,” the strategists wrote in a note this week. 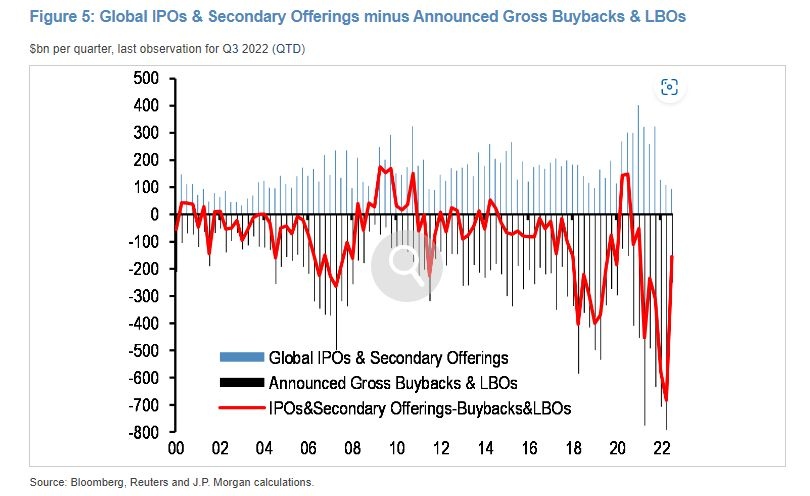 Discussion of how passive money impacts volatility are contentious -- as many people say it worsens stock swings as believe it damps them. But it’s at least worth considering whether the increasingly huge sums held in products sold as buy-and-hold investment vehicles have affected the market’s contour. Such accounts total US$6.7 trillion, more than one-sixth of the US market, with their share among all domestic-focused equity funds rising 4 percentage points since the end of 2020, data from Bloomberg Intelligence show.

Central to the buy-and-hold ethos is a view that while timing a recovery is hard, one will eventually come. Data compiled by Bloomberg shows that when holding US stocks for 10 years, the historical chances of losing money in the time frame have been slim -- less than 7 per cent, based on almost a century’s data on the S&P 500. Only two distinct periods saw negative returns: the decade around the 2008-2009 financial crisis, and the aftermath of the Great Depression.

“Optimism has won” over the long haul, said Victoria Greene, founding partner and chief investment officer at G Squared Private Wealth. “And because that theory has never been invalidated, you are conditioned to take the pain, and that it will get better, and that the pain is temporary and that the market is going to lead us out of it.” 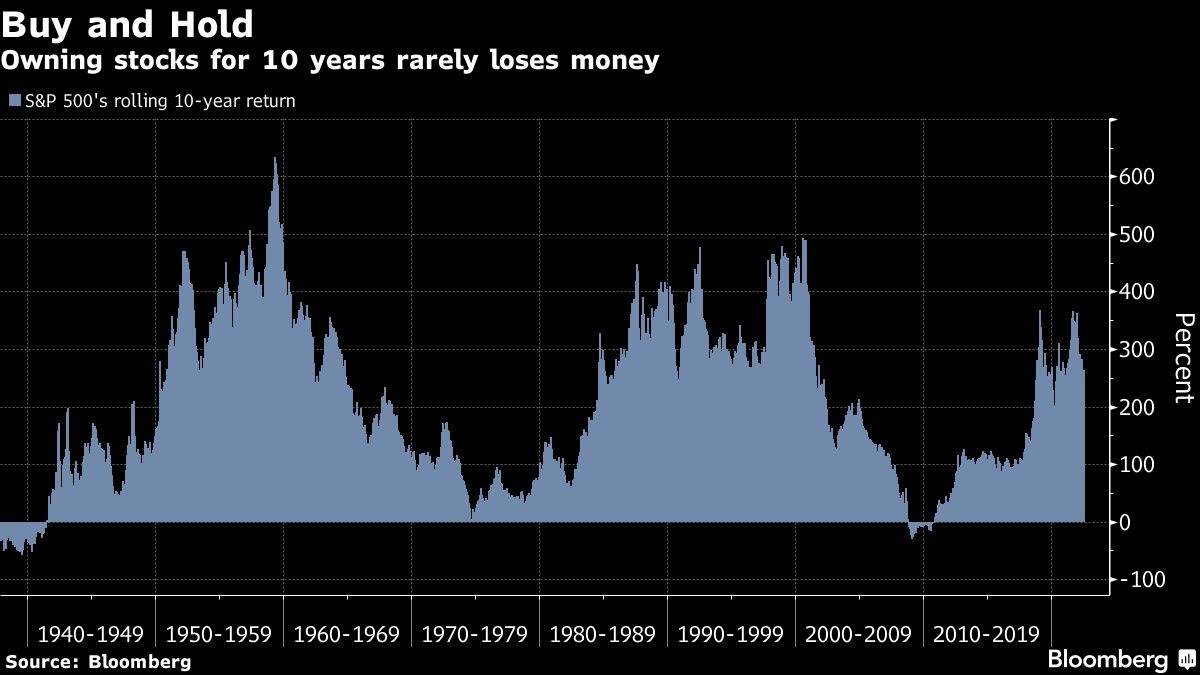 While money managers from hedge funds to mutual funds cut their equity holdings during the 2022 selloff, exchange-traded fund investors have not wavered. Buying picked up this week -- ETFs lured US$3.4 billion of fresh money per day, double the daily average of the year.

Eight months in, ETF investors have poured US$245 billion into equities, almost matching the total inflows during the entire year of 2020, when the S&P 500 was up 16 per cent.

“There hasn’t been a mass exodus,” Matt Bartolini, State Street Global Advisors’ head of SPDR Americas Research. “If an alien landed on the planet and you’re like, ‘bear markets are bad,’ the alien would assume, ‘OK, everyone must have rushed for the exits.’ And that has not happened.”

Another obvious factor in the run-up is psychological conditioning, specifically toward a greater willingness among investors to wait out bad patches. While dismissable as mindless dip-buying, patience paid off during the bull market, when stocks trading at historically rich valuations almost always turned out to be bargains based on earnings that materialized years later.

Retail investors, among the first bargain-hunters after the pandemic crash, are pouncing again even after all their profits made during the post-COVID era were wiped out. From freshly minted stocks such as AMTD Digital Inc. to long-time favorites like AMC Entertainment Holdings, Inc. and various bullish options, they’ve dived into the risky fringe of the market this month, in another baffling show of raging animal spirits.

All told, share purchases from small-fry traders jumped 62 per cent during the week through Tuesday, industry data compiled by JPMorgan show.

“If you went through the COVID crisis, it was so sharp and so quick, if you sold back then, you had a lesson,” said Keith Lerner, co-chief investment officer at Truist Advisory Services. “It’s almost like investors are like, ‘I’ve been through this, I did the wrong thing at the wrong time and markets have always come back.’”