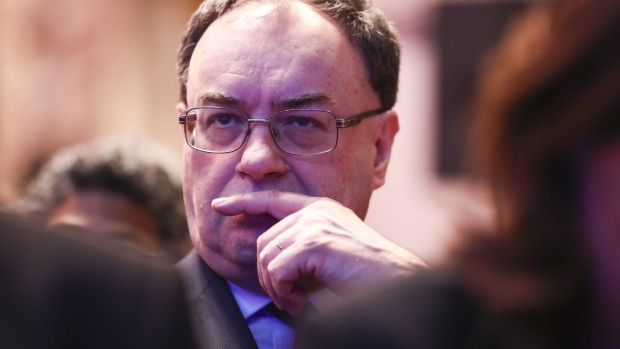 Andrew Bailey, chief executive officer of the Financial Conduct Authority (FCA), attends the launch of the COP26 Private Finance Agenda in London, U.K., on Thursday, Feb. 27, 2020. In a world facing a climate crisis, investors need to start taking account of carbon emissions and rising temperatures in their decisions, according to Bank of England Governor Mark Carney. Photographer: Bloomberg/Bloomberg , Photographer: Bloomberg/Bloomberg

(Bloomberg) -- Bank of England Governor Andrew Bailey signaled that policy makers have effectively abandoned forward guidance as a way of guiding investors about the likely path of interest rates.

Bailey said the system put in place in 2013 by his predecessor, Mark Carney, “is pretty hazardous (and) more hazardous in a more uncertain world.”

In 2013, Carney told markets that the BOE would consider raising interest rates when unemployment fell to 7%.

In place of that “hard” form of guidance, the BOE has recently been using softer “evidence” based guidance to provide an anchor for policy “in this world of greater uncertainty,” Bailey said.

“That’s a clear statement of intent to help people understand what we’re doing,” he added.

The current form of guidance is to “remind people of the policy framework.” He said markets had grown skeptical that the BOE was targeting inflation.

“A lot of people think we are in the growth business come what may,” Bailey said. “We are in the price stability business. That’s not so much forward guidance as a reminder of where we are.”