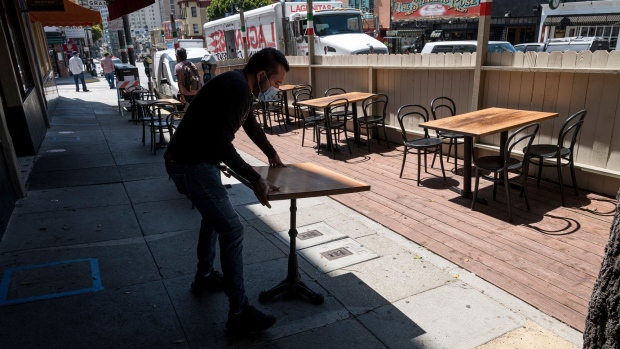 A person wearing a protective mask arranges a table outside a restaurant in San Francisco, California, U.S., on Tuesday, July 14, 2020. Governor Newsom pulled back on reopening efforts, banning indoor restaurant dining throughout the state and ordering a halt to indoor activities at gyms, hair salons and places of worship in the state's 30 most affected counties. , Bloomberg

Airline, defense and restaurant industry groups escalated their pressure on Congress and the Trump administration to provide additional pandemic relief as lawmakers tackle another round of stimulus for the U.S. economy.

Airline unions, along with a bipartisan group of House lawmakers, are calling for an extension of federal aid to prevent an expected wave of layoffs starting in October.

The Aerospace Industries Association, which represents more than 300 companies, is pressing congressional leaders to include relief funding for the defense industry to avoid loss of “critical” jobs as Senate and House weigh a new coronavirus rescue package.

Meanwhile, the National Restaurant Association Wednesday called for a second round of relief funds for small companies under the Small Business Administration’s Paycheck Protection Program.

Congress is working on additional aid packages as the coronavirus outbreak continues. It’s not clear whether the Republican-controlled Senate would join such an effort to extend payroll protections for airlines.

Seven lawmakers led by Representative Peter DeFazio, the Oregon Democrat who is chairman of the House Transportation Committee, wrote to colleagues this week seeking an extension of a US$32 billion federal aid program for passenger and cargo airlines and industry contractors to cover payrolls through Sept. 30 for another six months.

The airline industry is bracing for possibly tens of thousands of layoffs once restrictions tied to the original federal loans expire on Sept. 30.

The AIA sent a July 14 letter to House and Senate leaders calling for funding after the CARES Act authorized the Pentagon to reimburse contractors for extraordinary and unanticipated costs, but didn’t appropriate any money.

“This situation creates a problematic burden on our defense industrial base and a difficult choice for the Department of Defense,” AIA President Eric Fanning, wrote in the letter, which was obtained by Bloomberg Government.

The Pentagon would need at least US$10 billion to reimburse the defense industry for costs incurred because of the coronavirus pandemic, acquisitions chief Ellen Lord said recently.

The National Restaurant Association on Wednesday issued a list of policy priorities, including another round of PPP funds for businesses suffering at least a 20 per cent decline in gross receipts. They also said that eateries need longer-term solutions than what lawmakers created when designing the program, which initially covered an eight-week period during the early stages of the pandemic.

“We are looking to Congress not only for support for our short-term survival, but to create a long-term framework that sustains our role as a key part of the food-supply chain for the millions of families that rely on us for nourishment,” the group’s executive vice president of public affairs, Sean Kennedy, said in a statement.

More funds are needed to limit further job losses and closures caused by the pandemic, the groups said. The airline industry, facing steep declines in passengers as a result of the COVID-19 pandemic, has begun alerting employees to expect job cuts numbering in the tens of thousands. The hospitality industry, including food service establishments and bars, has suffered millions of job losses as indoor dining appears to create high risk for virus transmission. That has delayed and reversed reopenings, in addition to closures.

The restaurant group also reiterated its support for a bipartisan proposal for a US$120 billion relief fund designated for restaurants and called for the creation of a longer-term loan program designed to cover at least six months of operating costs. It also said the food-supply chain should have priority access to testing and an eventual vaccine and is seeking a series of tax breaks and protection from lawsuits.