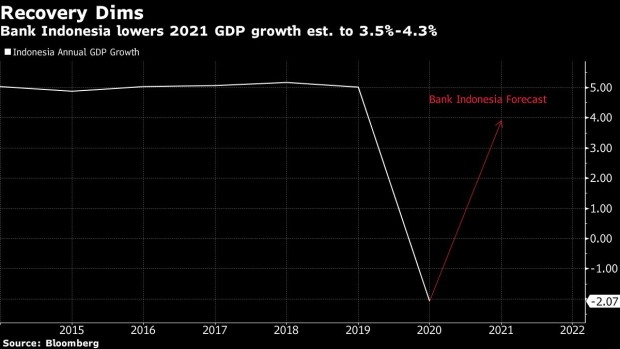 (Bloomberg) -- Indonesia’s central bank left its benchmark rate unchanged, and lowered its growth outlook for the year, as one of the most severe Covid outbreaks in the world puts the economy’s recovery at risk.

Bank Indonesia kept the seven-day reverse repurchase rate at 3.5% on Thursday, as all 29 analysts in a Bloomberg survey predicted. The central bank has held its policy rate steady since February and recently signaled that it may not make any rate moves until at least next year.

“This decision is in line with the need to maintain exchange rate stability and financial system stability due to uncertainty in global financial markets, amid low inflation forecasts and efforts to support economic growth,” Governor Perry Warjiyo said at a briefing in Jakarta.

The decision comes as the prospect of recovery in Southeast Asia’s biggest economy is fading and the latest Covid-19 outbreak cripples the country’s health system. Warjiyo said Thursday that Bank Indonesia now sees the economy growing 3.5%-4.3% this year, down from earlier expectations of 4.1%-5.1%, after the government imposed tighter curbs against the virus that put the brakes on demand and productivity improvements.

Concerns over the virus surge also brought a new pressure on the currency, which puts the monetary authority in a more challenging position. The rupiah climbed above 14,500 against the dollar, as credit rating companies such as Moody’s Investors Service and S&P Global Ratings see downside risks to the economy materializing.

The currency is down 3.1% so far this year and the sovereign bond market also has seen a recent exit of foreign funds, including net outflows of $779 million last week.

Warjiyo has pledged to keep rates low and ensure ample liquidity to support business sectors. However, the central bank may still need to continuously adjust macroprudential policies to enhance policy transmission, ensuring that stimulus actually gets to the places it’s most needed and lifts the real economy.