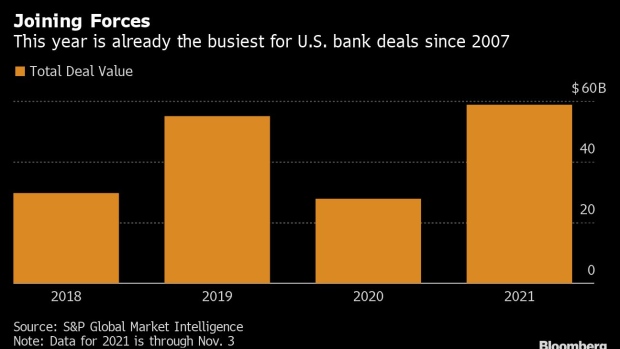 (Bloomberg) -- U.S. banks, which have been combining at levels not seen since before the global financial crisis, are now facing the near-term hurdles of stalled approvals, mounting opposition from Democrats in Washington and uncertainty over who will run the Federal Reserve. All of that is unlikely to keep the string of deals from ultimately continuing, according to analysts.

Regional lenders “may tap the brakes” in their merger-and-acquisition activity until there’s more clarity from regulators, Bloomberg Intelligence analysts Herman Chan and Rujuta Desai said in a report this month. Still, anemic loan growth and competition from larger or more technologically savvy rivals are likely to force banks to keep seeking out combinations even amid the obstacles.

“There are 4,951 banks -- that’s probably 4,900 banks too many,” Wells Fargo & Co. analyst Mike Mayo said in an interview. “Regardless of regulation, eventually economics will win out because the U.S. remains overbanked.”

The total volume of bank M&A clocked in at $58.6 billion this year through Nov. 3, the biggest total since 2007, according to data from S&P Global Market Intelligence. That includes blockbuster deals by some of the largest regional banks in the country, including U.S. Bancorp’s planned $8 billion acquisition of MUFG Union Bank NA and a $3.5 billion takeover of Investors Bancorp Inc. by Citizens Financial Group Inc.

Those combinations offer a way to scale up deposit bases and power through a challenging lending environment in which business customers and individual consumers awash in liquidity are shying away from borrowing.

“Deals offer a way to cut costs, get more efficient and provide a path to invest more in technology,” S&P banking analyst Nathan Stovall said in an interview. “We saw big changes in the customer over the last 18 months with shifting to digital channels. If you hadn’t completed your digital transformation, you feel like you need to, especially when you’ve got more and more new fintechs in the space.”

This year’s banking takeover targets tended to be larger than in past years, Stovall said. There have been 22 deals exceeding $500 million in value this year, up from a previous record of 14 in 2018, he said.

Any further combinations of significant size will need to overcome growing concern among U.S. lawmakers and uncertainty surrounding who will take top leadership positions at the Federal Reserve.

To add another wrinkle, President Joe Biden signed an executive order in July telling regulators to scrutinize consolidation across industries, including finance, more closely. With the Fed’s leadership still an open question, the central bank isn’t expected to make many big decisions in banking oversight before Biden appoints a new chairman and multiple governors.

Some banks are already feeling the slowdown. Executives at both New York Community Bancorp Inc. and First Citizens BancShares Inc. said on earnings conference calls that mergers initially slated to be completed this year would be delayed until 2022 as they await regulatory approval.

“Regional-bank M&A may tap the brakes in the near term because of the pall cast by regulatory delays to approve First Citizens’ acquisition of CIT Group and New York Community Bancorp’s purchase of Flagstar. A potential sale by BNP Paribas of its Bank of the West subsidiary could be the last sizable deal until there’s more regulatory clarity.”

There are also concerns that consolidation is ultimately not in the best interest of consumers, with opponents arguing that tie-ups lead to banks shrinking their presence in under-served markets and cutting back on services.

“Particularly in low-income communities, this means fewer bank branches,” Mehrsa Baradaran, a University of California, Irvine, law professor and author of “How the Other Half Banks: Exclusion, Exploitation and the Threat to Democracy,” said in an interview. Consolidation will lead to the U.S. developing both banking and credit deserts, with banks having “no obligation to lend to these communities because it’s just not profitable.”

In an August opinion piece, Bank Policy Institute Chief Executive Officer Greg Baer disputed the idea that regulators go easy on approving deals. Other industry watchers caution that tapping the brakes on dealmaking will serve only to help the largest financial firms.

“It’s pro-consumer to allow competition to develop,” said Tom Michaud, chief executive officer of Stifel Financial Corp.’s Keefe, Bruyette & Woods advisory business. Smaller lenders are “trying to build their own scale so they can be bona-fide competitors of the biggest banks, and I think that’s healthy.”

Mayo, the Wells Fargo analyst, compared a regulatory crackdown on deals to “giving a Christmas present to the CEOs of Bank of America and JPMorgan.”

There is one type of financial merger building steam: fintechs eager for bank charters might look to acquire smaller community lenders otherwise short on digital capabilities.

“The general theme of fintechs and banks coming together will be 100% true,” Michaud said. “Fintechs are going to buy banks.”