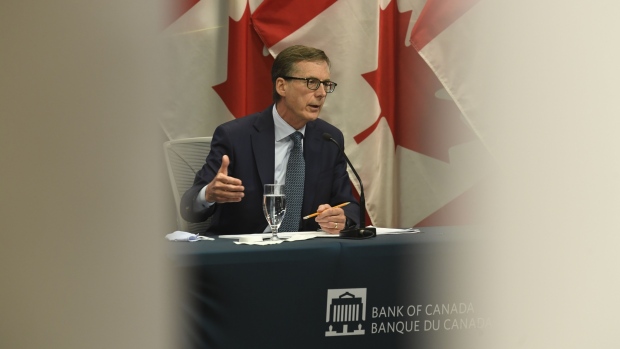 Tiff Macklem, governor of the Bank of Canada, speaks during a news conference in Ottawa, Ontario, Canada, on Wednesday, July 15, 2020. The Canadian Press/Bloomberg/Adrian Wyld

The Bank of Canada is expected to keep extremely accommodative policy intact on Wednesday, with an outside chance it will do even more to support the recovery.

Economists predict the central bank will restate a pledge to hold its overnight interest rate at 0.25 per cent until at least 2023, while continuing bond purchases at the current pace of $4 billion per week. The bank releases its December policy decision at 10 a.m. in Ottawa.

Analysts say policy makers led by Governor Tiff Macklem could be tempted to make a case for additional steps to buffer the economy from recent developments that threaten the recovery: a strengthening currency, increased restrictions as COVID-19 cases rise, and a pick-up in market interest rates. The bank, however, is constrained by rates already near zero and limits to bond purchases.

“There is very little to gain from talking hawkish, especially given where the Canadian dollar has traded,” Ian Pollick, head of fixed income, currency and commodity research at Canadian Imperial Bank of Commerce, said by email. “By the same token, any attempt to sound overly dovish runs the risk of being questioned given ongoing positive vaccine news, a decent data profile of late and restrictions of unconventional policy.”

Wednesday’s decision is a statement-only affair, without a press conference from Macklem or a new set of forecasts. Deputy Governor Paul Beaudry will give a speech Thursday providing insight into the bank’s thinking.

Among policy options available to Macklem are talking down the currency, raising concerns about the immediate economic outlook and even lowering borrowing costs further. Speaking to lawmakers last month, Macklem said there’s potential to reduce the policy rate without going negative, raising the prospect of a cut of less than 25 basis points.

“I suspect they would keep it in their back pocket for another meeting if need be,” Doug Porter, chief economist at Bank of Montreal, said by phone “But the fact that the governor even spoke about it means that sort of thing would at least be considered.”

The Canadian dollar is hovering at its strongest level in more than two years, reflecting in large part broad U.S. dollar weakness. Bond yields have moved higher amid vaccine optimism as well as the likelihood of a fresh injection of fiscal stimulus. 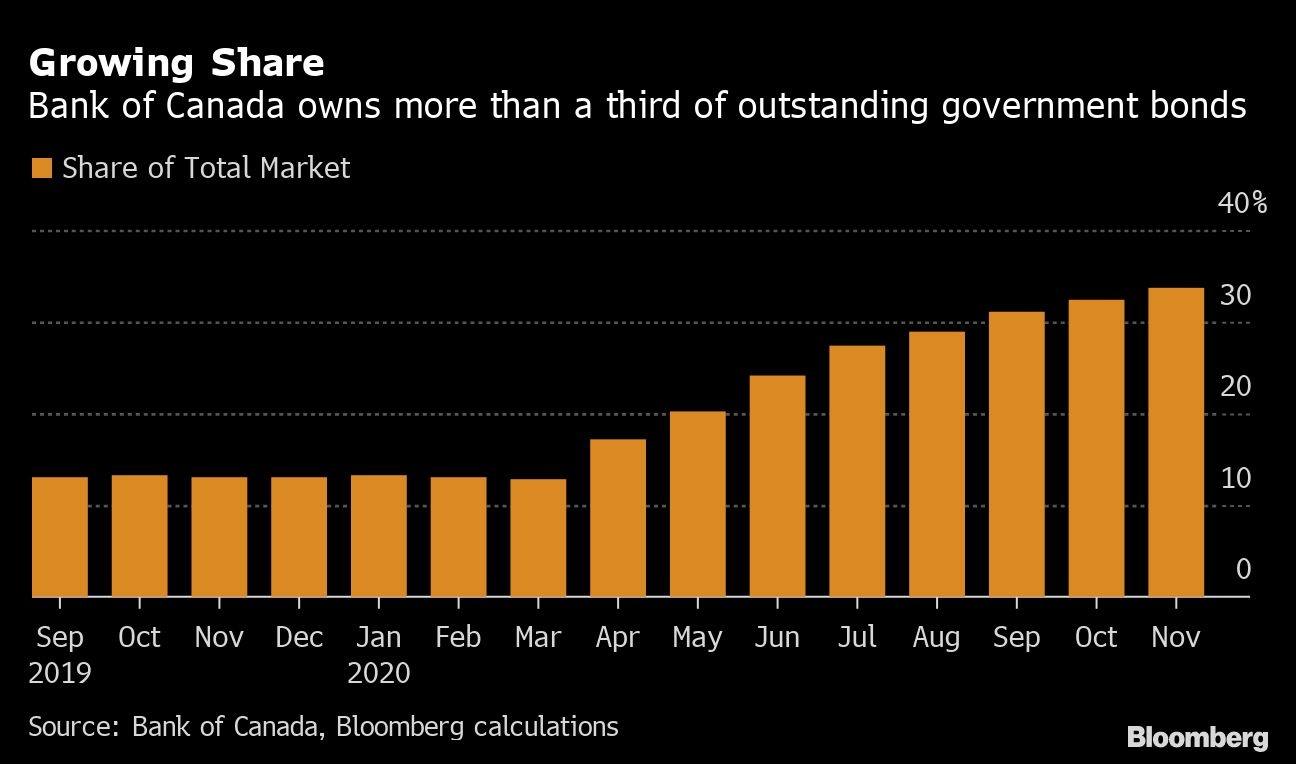 In a mini-budget last week, Prime Minister Justin Trudeau’s government forecast a deficit of $381.6 billion this fiscal year, or 17.5 per cent of total output. It also said it could spend as much as $100 billion in additional stimulus over three years as needed.

At the same time, however, new COVID-19 cases are spiking in Canada, forcing authorities in some areas to tighten restrictions, including a fresh lockdown in the financial capital of Toronto. Those moves are likely curtail growth in the fourth quarter and into 2021.

“The vaccine is good news but there’s a whole lot of other virus worries right now,” Jean-Francois Perrault, chief economist at Bank of Nova Scotia, said by phone.

Bank of Canada forecasts from October don’t show the economy fully absorbing slack before 2023, which will keep inflation below the 2 per cent target over that time. The guidance suggests that households, businesses and governments can expect cheap borrowing for several years to help cushion what’s expected to be a long slog to a full recovery.

In addition to giving its low-for-long rate assurance, the bank said it would adjust the scale of its quantitative easing program to address concerns asset purchases were getting too large for the country’s outstanding bond market.

While no changes to the program are expected Wednesday, some say the bank will need to pare back again soon to avoid problems. That complicates its decision making if the bank feels the need to continue providing stimulus.

“They’re going to have to taper early in 2021 or they risk hitting that hypothetical line in the sand,” Pollick said. “We estimate they will probably have to taper as they get to the second quarter of 2021.”

In his testimony before the House of Commons finance committee on Nov. 26, Macklem acknowledged market distortions could occur once the bank’s share of government bond holdings grows beyond 50 per cent. The bank currently holds about 34 per cent of the market, and if buying continues apace, Pollick estimates it will own 48 per cent by the end of 2021.