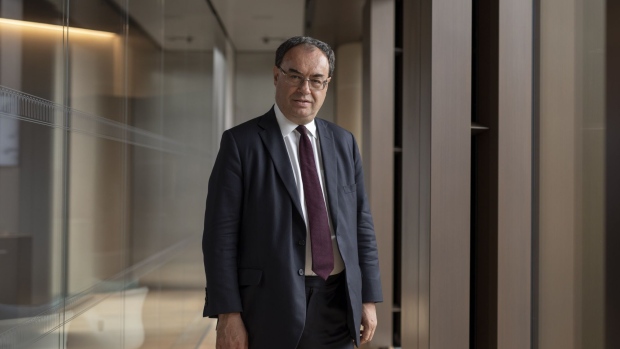 Andrew Bailey, chief executive officer of Financial Conduct Authority, poses for a photograph following a Bloomberg Television interview in London, U.K., on Monday, Sept. 16, 2019. The European Union should urgently reconsider its plan to prohibit some trading in London if a no-deal Brexit occurs next month, according to the U.K.'s top market watchdog. , Photographer: Jason Alden/Bloomberg

(Bloomberg) -- Bank of England Governor Andrew Bailey moved to reinforce the option that interest rates could rise this year while cautioning about the limits of monetary policy to balance diverging forces in the U.K. economy.

The bank’s key rate would become the prime tool of tightening policy when the time comes, although moving too soon could disrupt the U.K.’s still nascent economic recovery, Bailey said.

The remarks both conveyed the signal that the central bank’s stance could change rapidly and also sketched out the limits for what policy makers should do. They highlighted difficulty the BOE will have in responding to slowing growth at a time when shortages are pushing up wages and prices -- and making essential supplies of gasoline scarce.

“Monetary policy will not increase the supply of semi-conductor chips,” Bailey said in a text of a speech to be delivered Monday night in London. “It will not increase the amount of wind, and nor will it produce more HGV drivers. Moreover, tightening monetary policy could make things worse in this situation by putting more downward pressure on a weakening recovery of the economy.”