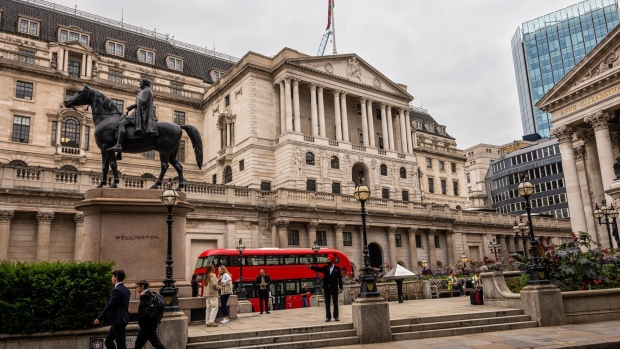 The Bank of England headquarters in London, UK, on Wednesday, Sept. 21, 2022. The Bank of England on Thursday is set to raise interest rates and start selling assets built up during a decade-long stimulus program, a historic tightening of monetary policy designed to clamp down on inflation. Photographer: Jose Sarmento Matos/Bloomberg , Bloomberg

The Bank of England has yet to decide whether to make a statement on market conditions following the collapse in the pound to its lowest ever level against the dollar.

Britain’s central bank is watching the market closely, according to someone with knowledge of the situation. City traders and economists say it may need to step in with an emergency rate rise to steady sterling and government bonds. The BOE declined to comment.

Earlier in the day, the prime minister’s spokesman said he would not comment on daily market movements.