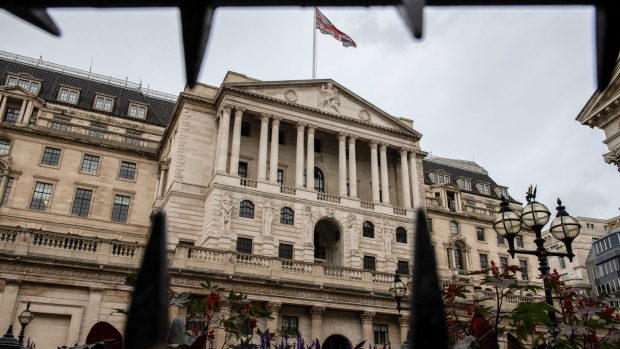 The facade of the Bank of England (BOE) in London, UK, on Friday, Oct. 14, 2022. BOE Governor Andrew Bailey was arriving at a meeting in Washington on Thursday as reports filtered out that the British government was preparing what could prove to be the mother of all U-turns. Photographer: Carlos Jasso/Bloomberg , Bloomberg

The Bank of England said it was restarting its corporate bond-selling as it looks to return to normality in the wake of a sustained selloff in U.K. assets.

The decision, announced in a statement on Monday, comes after the BOE paused sales in the wake of a run on U.K. gilts following Liz Truss’s government’s ill-fated fiscal plan. It said it will resume sales via multi-stock auctions in the week beginning Oct. 24. Active government bond sales are due to begin on Oct. 31.

An indicative list of bonds available for sale during next week’s operations will be published on its wire services page and its website at 11am on Friday, the BOE said in the statement. It holds £18.56 billion (US$20.9 billion) of corporate bonds under its Corporate Bond Purchase Scheme.

The announcement came on the first trading day after the BOE ended its emergency bond buying plan that it used to help stabilize markets and prevent a fire sale of the gilts used in some pension fund strategies from cascading through the U.K.’s financial markets.

The turmoil reached the government last week, prompting Truss to U-turn on large parts of her fiscal plans and oust her Chancellor Kwasi Kwarteng. His replacement Jeremy Hunt is due to announce his latest plan on Monday, after hinting tax hikes and spending cuts may be needed.

U.K. government and corporate bonds jumped Monday in anticipation of the change in fiscal stance.