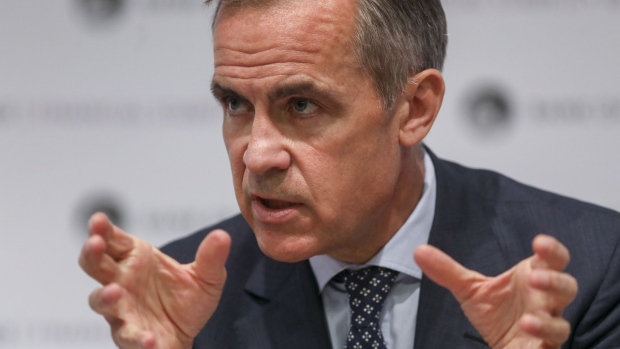 Mark Carney, governor of the Bank of England (BOE), gestures during a news conference following the publication of the Financial Stability Report at the central bank in the City of London, U.K., on Thursday, July 11, 2019. , Bloomberg

The Bank of England will cut interest rates in November, the Royal Bank of Canada said, becoming the first to predict policy easing this year.

“We see the MPC delivering a 25 basis-points rate cut this year in response to the extending of Brexit uncertainty and weaker external environment,” RBC analysts Peter Schaffrik, Cathal Kennedy and Vatsala Datta said in a note. “We no longer see the MPC as capable of delivering on its ‘gradual and limited’ hiking bias, even in the event of a ‘smooth Brexit.’”

Bank of England Governor Mark Carney and his fellow policy makers still maintain that gradual and limited rate rises will be necessary if the Brexit process goes smoothly. That view is at odds with markets, who are increasingly forecasting the chance of a rate cut as the possibility of a hard Brexit rises. The Federal Reserve and European Central Bank have also indicated the monetary easing is on the way as the global outlook dims.

RBC said that the most likely scenario for the U.K. is a general election and an extension of article 50 to allow for the formation of a new government to take place. The current deadline is Oct. 31, and the next prime minister and leader of the Conservative Party is still being decided.

Silvana Tenreyro, who sits on the bank’s rate-setting committee, said Wednesday that the BOE is exploring ways to show the sensitivities in its conditional assumption of a smooth Brexit and the tension with the market outlook and aims to include an update in its Inflation Report published on Aug. 1.

RBC said that even if Brexit goes smoothly, the BOE still won’t change policy throughout 2020. In the event of a no-deal split on Oct. 31, rates would be cut immediately, the report said, possibly even before the Monetary Policy Committee’s scheduled announcement on Nov. 7. That would likely be followed by another reduction in the benchmark and the restarting of quantitative easing before the end of the year.