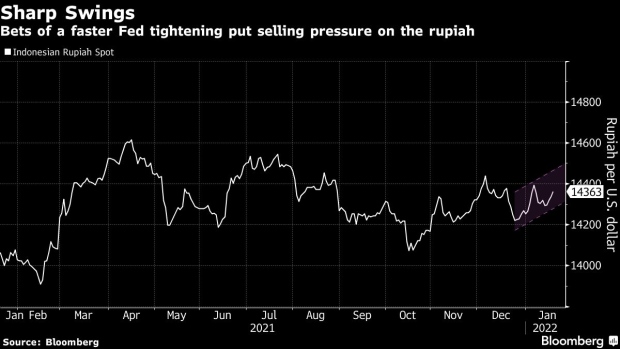 An employee wearing protective gloves handles bundles of Indonesian rupiah banknotes at a PT Ayu Masagung currency exchange in Jakarta, Indonesia, on Tuesday, Aug. 18, 2020. Rupiah, Asia’s worst-performing currency this quarter, is due for a turnaround and it may begin this week should Bank Indonesia leave interest rates on hold. Photographer: Dimas Ardian/Bloomberg , Bloomberg

(Bloomberg) -- Indonesia’s central bank gave the first signs Thursday that it will begin normalizing policy soon, even as it left its benchmark interest rate unchanged.

Bank Indonesia kept the seven-day reverse repurchase rate at a record-low 3.5% at its first monetary policy meeting of 2022, as predicted by all 29 analysts in a Bloomberg survey. In a briefing in Jakarta, Gov. Perry Warjiyo said BI will start raising banks’ reserve requirement ratio, with an increase to 5% in March.

“BI is trying to have its cake and eat it too,” preparing to normalize policy while encouraging lending growth through macroprudential measures, said Wellian Wiranto, economist at Oversea-Chinese Banking Corp. in Singapore. “To that end, a gradual tightening of RRR is in the pipeline too.”

The Jakarta Composite Index pared its gains after the decision, and was up 0.3% as of 2:39 p.m. local time.

Southeast Asia’s biggest economy has rebounded strongly from last year’s recession, but the recovery may be hampered by the spread of the omicron variant, which has driven new Covid-19 cases to their highest level in three months. While the government has refrained from tightening curbs, a worsening local outbreak could force its hand.

Bank Indonesia is trying to pull off a balancing act between reviving the economy -- seen expanding 4.7%-5.5% this year -- and supporting the currency as it embarks on a “pro-stability” focus for 2022.

The rupiah has been under pressure as investors pulled funds amid expectations for faster U.S. rate hikes, declining 0.75% against the dollar so far this year, Asia’s second-worst performer. Meanwhile, the trade surplus could shrink further due to a coal export halt and rising demand for imported goods, eroding support for the currency.

Benign inflation is giving the central bank room to breathe, as price gains are on course to meet Bank Indonesia’s 2%-4% target this year after hovering below that range for all of 2021.